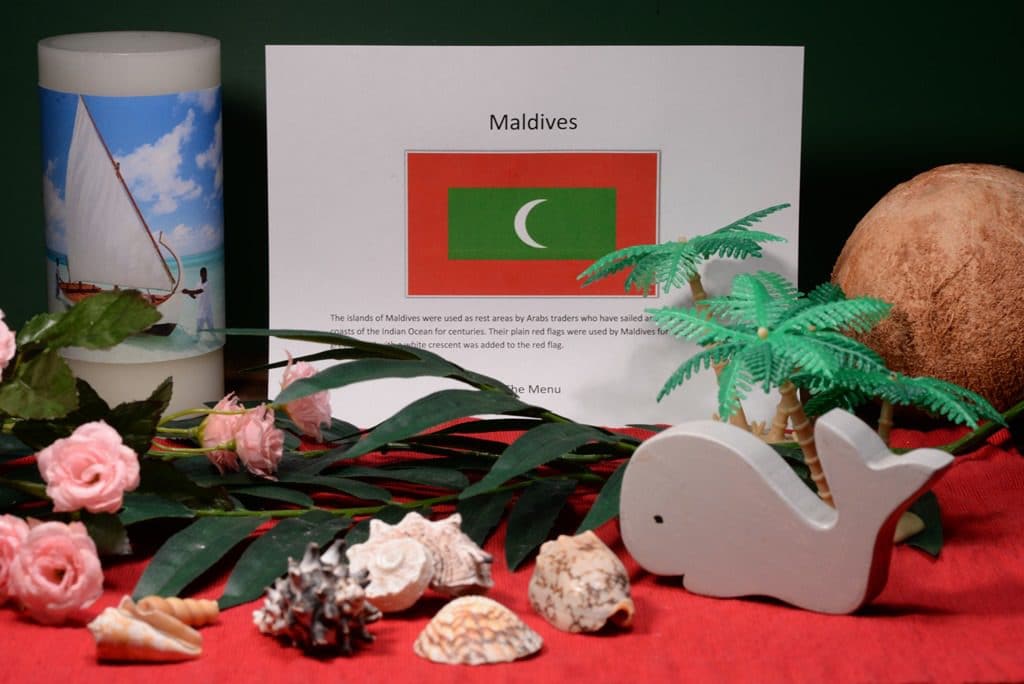 The Maldivians call their country, “Dhivehi Raajje” meaning, “Kingdom of the Dhivehi people.” The capital and main island of the Maldives, is Male’.  In ancient times, it was called Mahal or Mahal Dvipa.  Male’ was always the most important island and where the king resided.  “Dives” means “islands”, so it is logical to conclude the name means, “The Islands of Male’.”  Another theory is derived from the Sanskrit work, “malavipa” meaning, “Garland of islands.”  This is a wonderful description of what makes up the country of the Maldives.  The Maldives are an archipelago of beautiful, white sandy, coral islands.  Palm trees sway in the breeze, along the turquoise blue, to jade green, crystal, clear waters of the Indian Ocean.  Most would simply call this, “Paradise.”

The Republic of the Maldives is more than 99 percent ocean.  It spans over 35,000 square miles, with only 115 square miles of land; making it the smallest country in Asia.  It has 26 natural atolls, 1192 islands, of which, only 200 or so are inhabited.  The Maldives Republic is also the lowest nation on earth in altitude, with an average elevation of only 6 feet.  The Maldives are located in Southern Asia, in the Indian Ocean, just south-southwest of India.  The islands have a rich, 3000 year old culture, as they have been a strategic location for seafarers for centuries.

It is believed the islands were first inhabited as early as 1500 BCE and then were settled in the fifth century BCE by Buddhist seafarers from India and Sri Lanka.  Contact with Arab travelers, over time, paved the way for the Maldives to adopt Islam as their religion.  Islam replaced Buddhism by 1153 CE when King Dovemi Kalaminja, officially accepted Islam.  The Maldives came under British protection in 1887 and they became fully independent on July 26, 1965.  The official language is Dhivehi, a pidgin language that is somewhat similar to the Sri Lankan language but with many nuances from assorted influences overtime.  It is the only country that speaks Dhivehi.  English is taught in schools and is the unofficial second language.

Today, Sunni Islam is the official religion.  Adherence is legally required for citizens by a revision of the constitution in 2008:  Article 9, Section D, states that “a non-Muslim may not become a citizen of the Maldives.”   It is the Sharia law that forms the basic code of law of the Maldives.  Most of the inhabited islands of the Maldives have several mosques.  They are beautiful, white washed buildings, many of them constructed of coral stone.  The gold-colored dome of the Mosque, known as the Islamic Center, is the first structure you will see when approaching the main Island of Male’.  Coral reefs are now protected worldwide, so coral is no longer used as a construction material.  Many of these old coral structures are UNESCO World Heritage sites.

The beaches of the Maldives are mostly coralline and strangely, it is the parrot fish that gets the credit for most of that exquisite, fine, soft, white sand.  It is estimated that one parrot fish can produce about one ton of sand per year.  Yes, parrot poop, or what we know as their beautiful sand, is the result of undigested corals they eat.  Of course, there are other factors that make up sand as well, but only about five percent of the worlds’ beaches are coralline; most are made of quartz.

Fishing is a loved pastime and occupation in the Maldives. The area is teeming with all types of fish.  Fishing is the second largest industry in the Maldives, after tourism and employs about 20 percent of the population.  All fishing is done using fishing lines, as the use of nets is illegal.  The fishing fleet consists of one of the Maldivians most famous symbols, the Dhoni.  This is a small, flat bottomed, boat, perhaps inspired by the ancient, Arabian Dhow, famous for its curved bow.  Many dhonis have converted from sails to outboard motors, to increase the annual fish catch totals.  Tuna is one of their biggest exports.  Shipping is also another important industry for the Maldivians.

The Maldives are especially in jeopardy due to global warming and the rising ocean level.  In fact, the president in 2009, actually held an underwater cabinet meeting to bring world-wide attention to the problem.  The Maldives were also gravely affected by the massive tsunami that hit on December 26, 2004.  Eighty-two people died, fourteen of the islands became uninhabitable and another 79 islands were left without any safe drinking water.

Some islands of the Maldives, have spectacular resorts for tourism and do serve alcohol and allow bathing suits.  These two things are strictly forbidden on the other Islands.  The islands are world renowned for their beauty and tranquility and especially as honeymoon destinations.  The food served on the resort islands, catering to tourism, prepare about every type of cuisine imaginable.

The locals eat much differently and many of the food items are imported, as there is not much arable land on the islands.  The staples, of course, include fish and coconut, with most all the protein coming from the sea.  Coconuts are used in all its forms.  Coconut oil is used for cooking, coconut milk for curries and rice and grated coconut are components of most dishes. Coconut hulls, called copra, are a big export item.  Some vegetables are grown, such as pumpkins, sweet potatoes, corn and millet.  Breadfruit, mangoes, pineapples, sugarcane, limes, bananas, taro and chili peppers are also grown, mostly in homestead gardens.  Fresh water is a constant concern, as it is getting harder to come by.  Rice, which is a staple food in the Maldives is imported.  The main influences in the Maldivian cuisine come from its closest neighbors, India and Sri Lanka.  The Maldivians make a unique dish called Garudiya that is a clear fish broth, which has been included on the Maldivian table for generations.  Some consider it to be the national dish.  I wanted to make it for this journey, but was unable to find fresh tuna at the market.  In this dish, after the tuna-based garudiya is cooked and all the water has evaporated, it forms a thick brown paste called Rihaakura, which is also used often in Maldivian dishes.

So let’s enjoy a Maldivian meal: 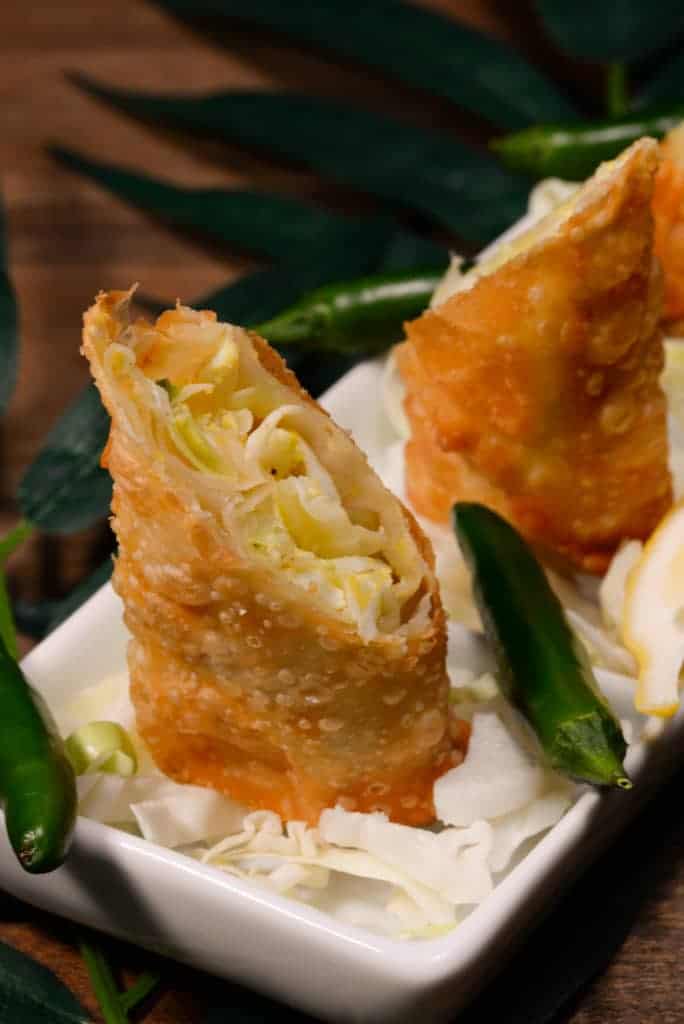 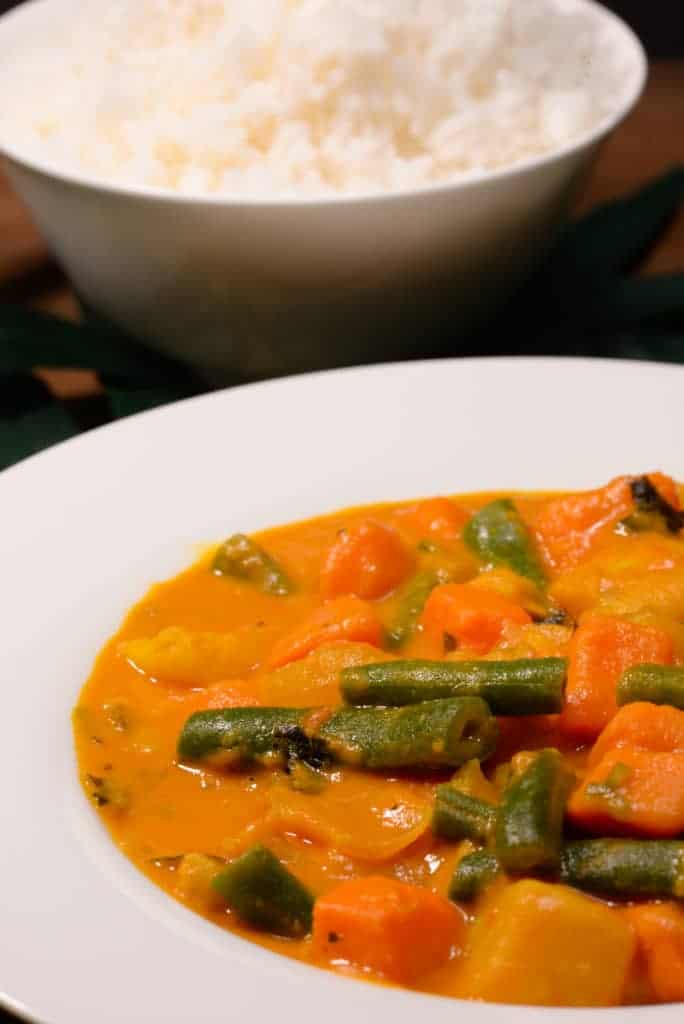 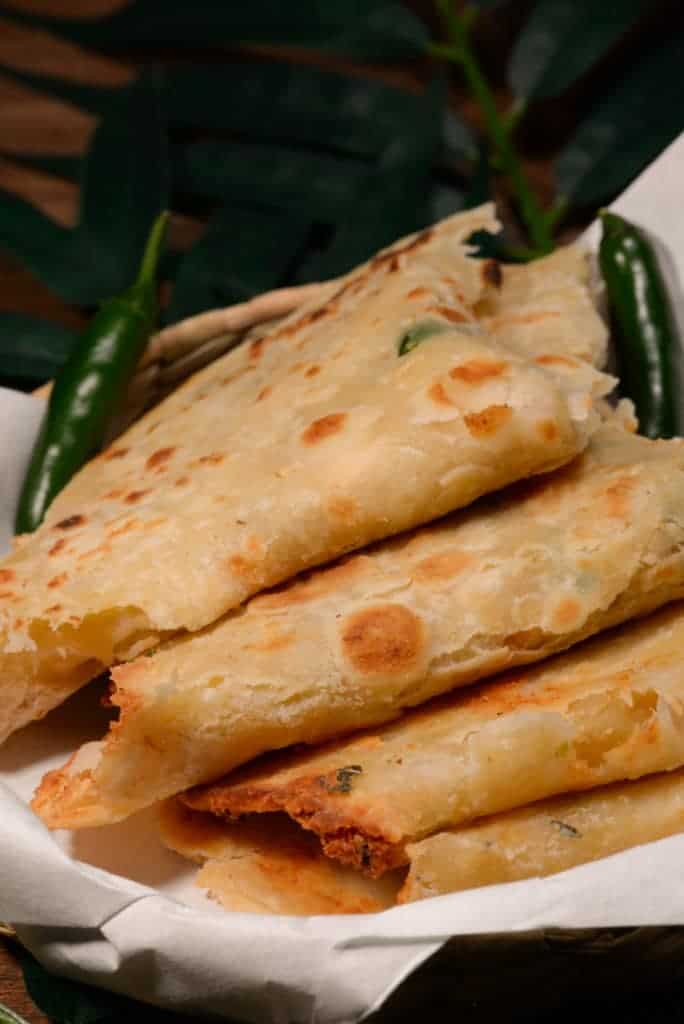 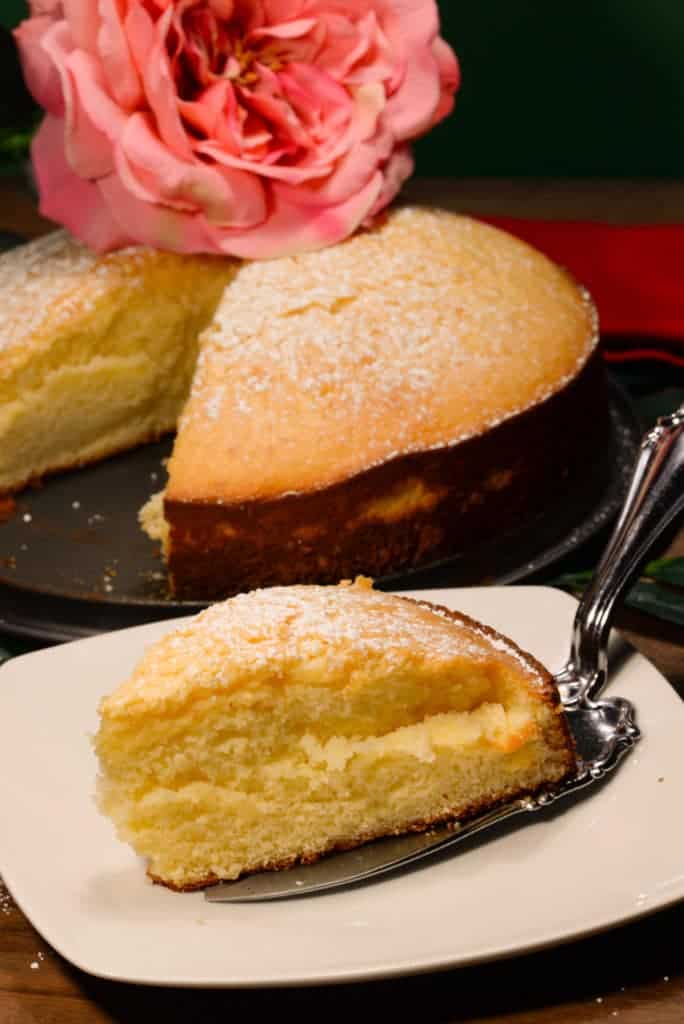 We set the table with the colors of the Maldivian flag; green for peace and prosperity and red for the bloodshed of the past.  The flag also has a white crescent shape, symbolizing Islam.  The national flower is a pink rose and we decorated with coconut palm fronds and shells.  The Maldives in medieval times supplied cowry shells, which were used as units of currency for trade.  Cowry shells are still abundant there.  A whale figurine was also part of the setting, since it is the one place on earth where nearly ten to twelve species of whales can be found; this includes the mighty blue whale (so large that a small child could crawl through the aorta of its heart.)  We put on Bodu Beru music, also known as big drum music, as a reminder of the relationship with east Africa, centuries ago.  The music has a rhythmic beat, often perceived as transcendental.

Our first course was a egg and cabbage egg roll, that was deep fried.  It had a hint of hot, green chilies and we absolutely devoured them.  This is a street food, called biskeemiyaa, which is often made with smoked tuna, as well; a perfect starter for any occasion.

For the main course, we savored a delectable, vegetable curry.  Curries of all types are loved in the Maldives; they are most often, made with fish.  For our main course, we decided to go vegetarian, since there was fish in the flat bread.  Rice is always served, as well as roshi, an Indian flat bread.  We made a special flat bread that was stuffed with tuna and potato.  It was delicious!

For dessert, we enjoyed a simple cake, made from sweetened, condensed milk.  It was amazing and was not too sweet.  It  would be lovely with any type tropical fruit found on the islands.  We served ours with strawberries and just a sprinkling of powdered sugar.

As we say goodbye to the beautiful islands and atolls, which make up the Maldives, we do so with hope, that that they will not succumb to global warming.  We hope to turn this problem around and save the Maldives for generations to come.  Because, everyone should experience paradise, at least once.

Did you know that there is an English word, derived from the Dhivehi language?   The word is atoll, the word in Dhivehi is, atholhu.