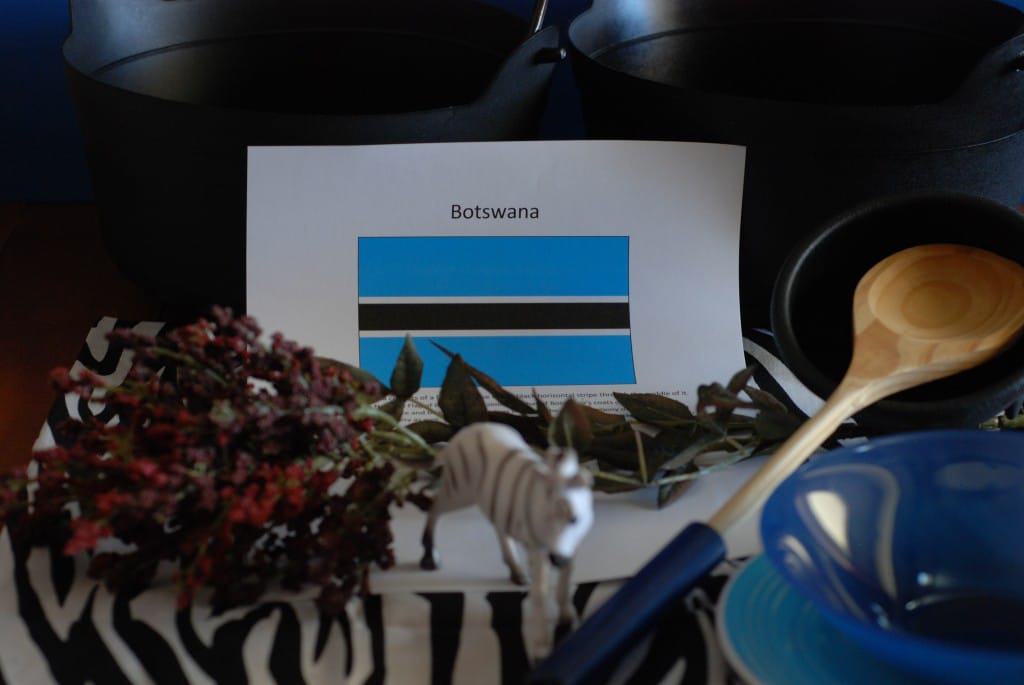 Botswana, means the “Place of Tswana.” Citizens are called Batswana or the Tswana People, and Setswana is the language they speak. If referring to a singular person, it is simply, Motswana. English is one of two official languages, as Botswana was formerly known as the Bechuanaland Protectorate under the British. Botswana gained her independence peacefully in 1966. Botswana is Africa’s longest surviving democracy.

She is a landlocked country and part of the only place on earth where four countries meet. It is known as the “Four Corners of Africa,” where she borders Zimbabwe, Namibia and Zambia which make up the four corners. Botswana also borders South Africa to the south. A large brown pole at the confluence of the Zambezi and Chobe rivers, marks the spot where the four countries touch.

Two thirds of the country is home to the great Kalahari Desert, which is swathed with grasses and scrub and has very little surface water. The name Kalahari means “Thirstland.” The entire country is prone to extended droughts and with the population boom in the 70’s and 80’s, there is a concern about environmental resources. Pula is what the country’s currency is called, which translated means “rain.” You will also hear the Tswana people chant “Pula” at sporting events, a pretty good indicator of how important rain is to them.

The population is said to be primarily Tswana, although the government census does not collect information on ethnicity. There are also many other tribes in the country, with San being the indigenous desert people, also known as the Bushmen. Although Setswana and English are the official languages, there are at least 26 others that are spoken by different ethnic communities. One, Khoisan tongue, is !Xoo and sometimes called “The Click” language because of their integral click sounds. It is said to be the most complex sounding language in the world.

Home to a UNESCO site, known as the “Louvre of the Desert,” Tsodilo Hills has one of the highest concentrations of rock art in the world with over 4500 paintings and has an archeological accounting of over 100,000 years of human activity.

Diamonds were discovered soon after she gained independence from England. Botswana has three of the largest and richest mines in the world. This resource is the reason for the stability in the country and accounts for 76% of exports.

Botswana is said to be home to more African elephants than anywhere else in the world, (even edging out Tanzania.) The zebra however, is their national animal and is found on their national crest. Home to many wonderful African wild animals, Botswana is a popular safari destination, with many luxury tours available.

Cattle are very important to the Batswana’s and they pride themselves on raising some 3 million head of high quality beef. Two broad cattle production systems are practiced. The first is the traditional cattle post system, where cattle free graze on unenclosed, tribally administered land. Botswana's raised plateau provides a natural range land, supporting cattle as well as large sheep and goat populations. Batswana’s have a traditional right to grazing with unlimited cattle numbers. The second system is a freehold farming system with fenced ranching. Households often maintain three residential sites; one in a village, (often their village of origin) one around the village perimeter for freehold farming, and one farther out at the cattle-post.

Beef is the most popular meat followed by goat and chicken. Cooking a traditional chicken dish for a visitor is considered a most hospitable gesture. However, the national dish of Botswana is Seswaa or Chotlho, a popular dish, almost always made for special occasions. It is beef cooked in a three-legged iron pot, simmered, with only salt and water. (Adding any other seasonings is considered taboo.) Usually the dish is prepared by men. The meat is chopped up and beaten with a large wooden spoon until soft, then served over a thick porridge, called pap.

Sorghum and maize are the main staple crops. There is also a wide variety of beans and other food crops such as spinach, carrots, cabbage, onions, potatoes, sweet potatoes, tomatoes, and lettuces. Watermelon is said to have originated in Botswana but is only available for a short period of time when in season. Another melon known locally as lerotse or lekatane, is used in a variety of ways as a side dish. Other types of melons grow wild in the sandy soils and add an invaluable source of food and water for the people of those areas. There are also some strange traditional foods that are eaten there, such as Mopane, “worms” which are considered a delicacy.

So let’s eat Botswana style…. No worms, I promise! 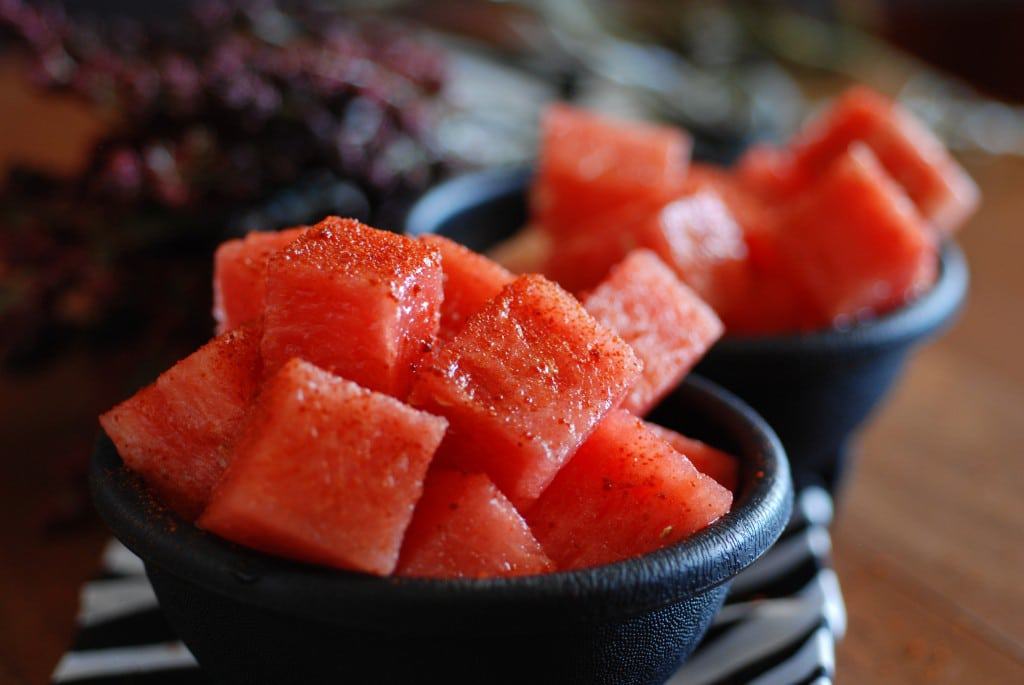 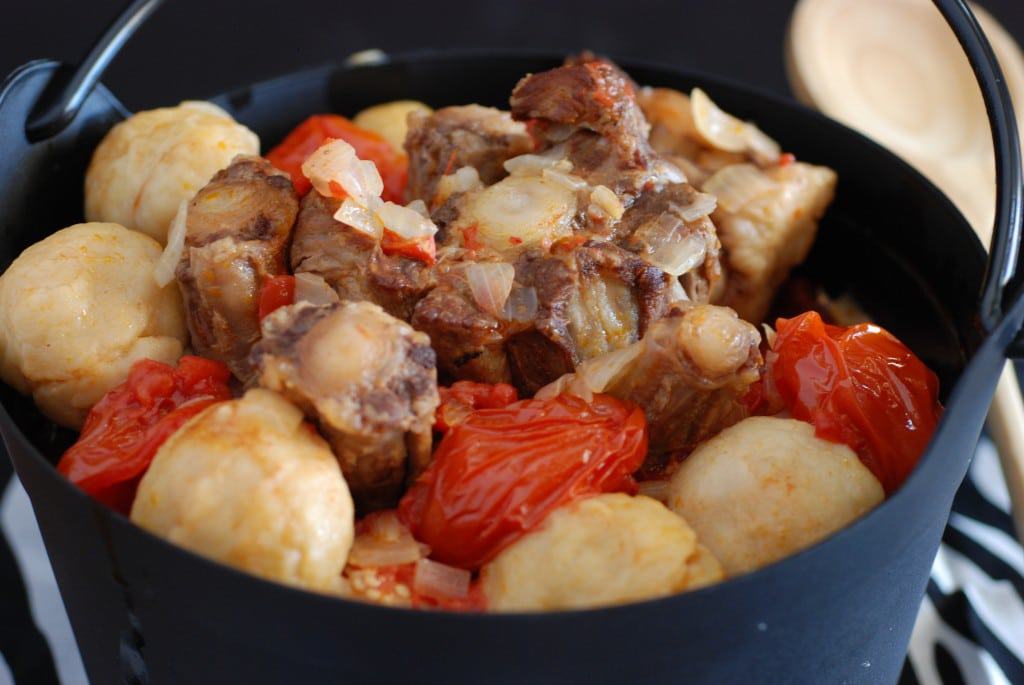 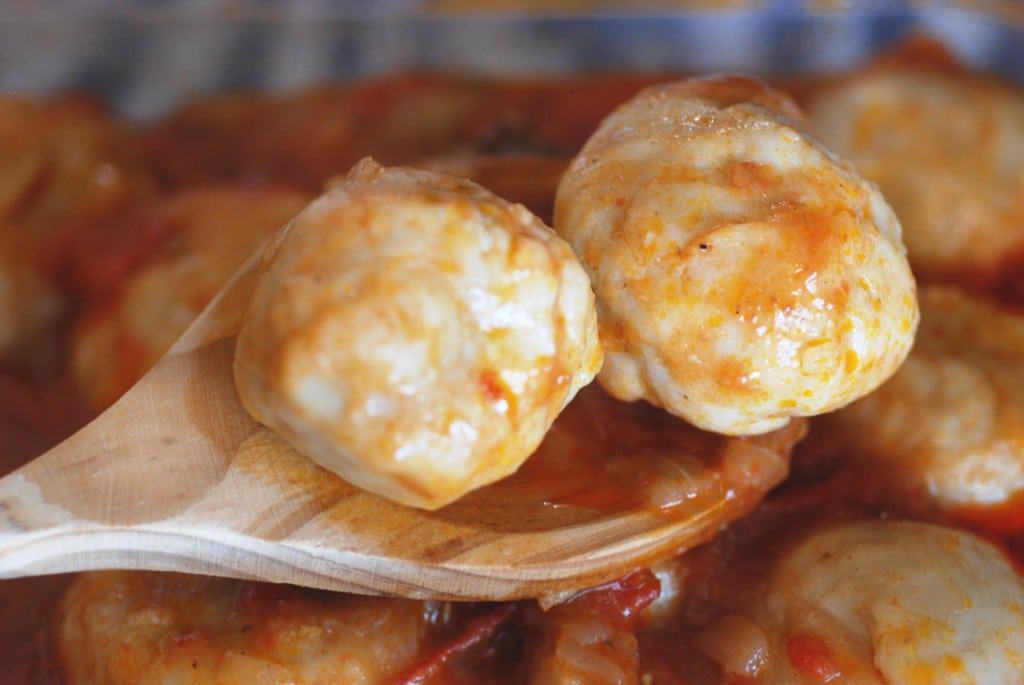 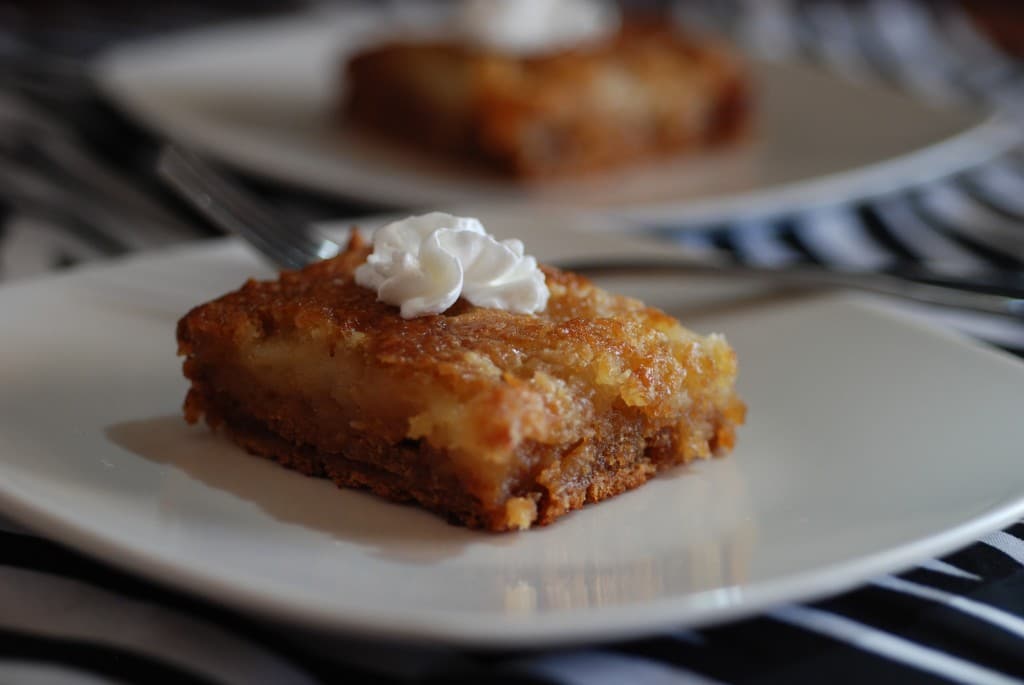 For the meal we decorated with a zebra motif, giving a nice safari feeling to our table scape. Normally, one would sit on the floor or a low table in Botswana to eat. The main meal would be eaten at lunchtime with leftovers or just bread and tea eaten for dinner. We began the meal with a blessing “Pula” and a prayer for a cure, as they have the second highest rate of Aids/HIV in all of Africa.

The first course was an appetizer of freshly sliced watermelon sprinkled with some piri-piri chili powder. I thought the chili powder added a nice kick to the watermelon without overpowering it. The combination of sweet and spicy creates such a lovely contrast.

For the main course, I had decided to make the very popular oxtail stew. As cattle are a good source of income for export, which leaves the Tswana people with what some may consider the less than desirable parts of the cow. I easily found oxtail in my local supermarket and surprisingly, it was not priced as an undesirable piece of meat. I paired the oxtail with a dumpling that would commonly be made there. Although bread flour is imported, it is a staple in their diet. The oxtail takes a while to cook to get nice and tender, but well worth the wait, it was delicious. The dumplings I thought were a bit heavy but then again, since this is the only substantial meal of the day, it makes sense it would be a hearty one.

For dessert we had what is called Malva Pudding, it is commonly served in Botswana and can be found on many of the safari tours as a favorite dessert among the clientele. The pudding is more like an incredibly moist and sweet cake.

To drink, we had what they simply call Ginger, a non-alcoholic beverage made of ground ginger, tartaric acid, cream of tartar, sugar and then flavored with fresh oranges. (Milk would also commonly be found on the dinner table.) They do brew a variety of beers in Botswana, one made of Sorghum seeds called Bojalwa ja Setswana and is known as “the beer of Botswana”. Be careful of local brews, as some are known to be of very high alcohol content. Here are some names that should clue you in to their potency: laela mmago (say goodbye to your mother) as o lala fa (you sleep right here) and motse o teng godimo (there is home in heaven).

As we say goodbye to our journey to Botswana, I leave with a few thought provoking proverbs:

“No one in the world needs an elephant tusk but an elephant”
“Silence has a mighty noise”
And
“All people share the same ancestry.”