For this journey, we head to Cameroon, which was named by the Portuguese explorers who arrived there in 1472. The Wouri River was so abundant with crayfish and prawns, they called it “Rio dos Camaroes” (River of Prawns). Cameroon is referred to as “little Africa” due to her ethnic diversity and variety of climates. There are so many different ethnic tribes living in this country, representing most all of the ethnic groups living in the whole of Africa, that over 250 local languages are spoken there. Additionally, she has a very diverse climate and geography from desert to rainforest; almost a mirror of the continent itself. Located on the west coast of Africa, she borders the Gulf of Guinea to the west, Nigeria to the northwest, Chad and the Central African Republic to the east and the People’s Republic of Congo, Gabon and Equatorial Guinea to the south. The capital city, Yaounde’, is in the central province.

French Cameroon (Cameroun) became independent in 1960 and the British Cameroon gained independence in 1961. The country came under single party rule in 1965 and became officially the Republic of Cameroon in 1984. Both English and French are listed as the official languages of Cameroon. Since her independence, there have been coups attempts and ethnic tensions between groups in the northern and southern regions of the country. In 1992 came the legalization of multiparty politics. Today these parties are associated with specific ethnic groups and regions. Many areas have their own hierarchical system in place, aside from the government.

As one can imagine, with so many different ethnic tribes, there are just as many belief systems. Many practice their own indigenous beliefs however a large percentage of Christians reside in the south and Muslims in the north. There are several cultures in the west and in the east that practice divination, where they perform public autopsies to determine the cause of death. They are concerned with any death deemed to be caused by witchcraft. In many cultures the announcement of a death is through the public wailing of women. One can only imagine the profoundly, mournful sound they make. The Grassfield’s people bury their dead and close relatives shave their heads out of grief. They observe a week of public mourning called cry-die. A year later, the deceased are honored in lavish celebrations. Masks are an important part of the culture in Cameroon and are used for many occasions such as these celebrations.

Family life is very different among the ethnic tribes as well. There are rural, polygamous compounds where a male head of the household lives with his wives and their children. In other regions, families have more traditional relationships. It is common among most of the tribes that infants are held close to the mother but once they can hold their head up, siblings take over the task.

Cameroon is blessed to be self-sufficient with food. Agriculture, the production of food, as well as cotton, coffee and cocoa employs nearly two-thirds of the population. Many people grow enough to feed their families and then sell the extra in the local market. They typically have a separate area for women to sell produce and palm oil and an area for the men to sell livestock and bush meat. Industries, such as mining, aluminum processing, beverage manufacturing, forestry and petroleum are a significant source of income for the country.

Although there are many differences among the tribes, there are a few things that are common among them. Soccer is the national sport of Cameroon and they are most proud as their national football (soccer) team gained world recognition when they made it to the World Cup quarter finals in 1990. The team has also won several African cup titles, which is a source of national pride, as well as a gold medal in the 2000 Olympics. Another commonality is the sharing of food. A cooked meal is one of the major ways to express kinship and hospitality and Cameroon gets her fair share of immigrants. As recently as June of 2014, almost 90,000 people (mostly hungry, women and children) fled to Cameroon from other African nations.

Music and dance are an integral part of Cameroonian ceremonies, festivals, social gatherings, and storytelling. Traditional dances are highly choreographed and performed separately by men and women. In a typical performance, the music consists of a chorus of singers echoing a soloist. Musical accompaniment may be as simple as clapping hands and stomping feet but traditional instruments are also used such as drums, flutes, horns, rattles, scrapers, stringed instruments, whistles, and xylophones; the exact combination varies with ethnic group and region. The two most popular styles of music are Makossa and Bikutsi. Makossa, mixes folk music, highlife, soul and Congo music. Bikutsi is foot stomping, dance music.

The cuisine of Cameroon is similar to other West African countries but there is also an influence from the French. The food varies by region but is typically one large meal served in the evening. In the north, staple foods are corn, millet and peanuts. In the south people eat more root vegetables as a well as plantains. One of the dishes considered to be the national dish is called n’dole. This is made with a boiled bitterleaf (a type of green, leafy vegetable) which grows all over in Cameroon. Tropical fruits are abundant in Cameroon and so are different types of meat and fish, for those who can afford them. In most West African countries they eat a starchy food called fufu (much like cous cous). It is cooked and then pounded with a pestle and made into balls. They eat it using three fingers and dip it into a variety of delicious sauces. I actually tried to make this for our meal but unfortunately, I could not master it. I hope someday to find a proper recipe to make fufu using cassava. In the meantime, I think you will like what we decided to cook to represent Cameroon. 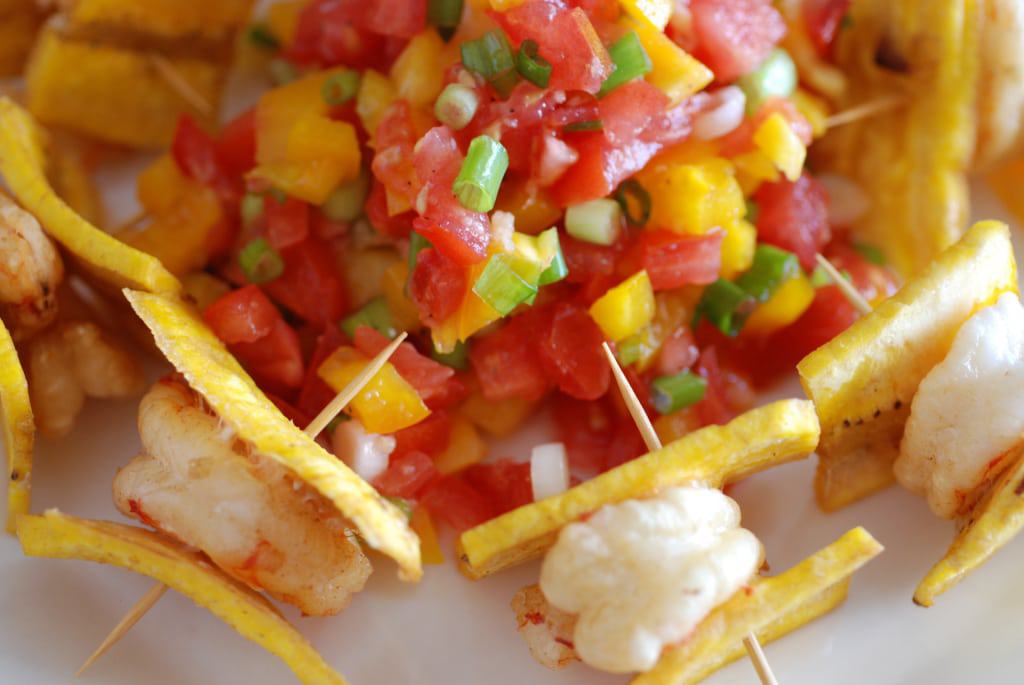 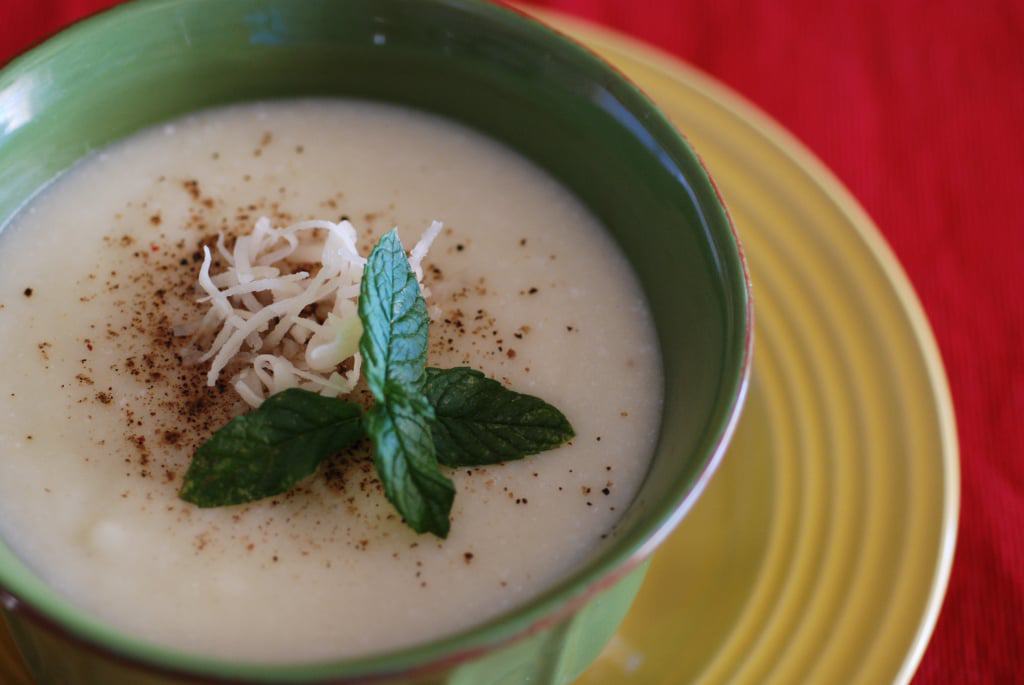 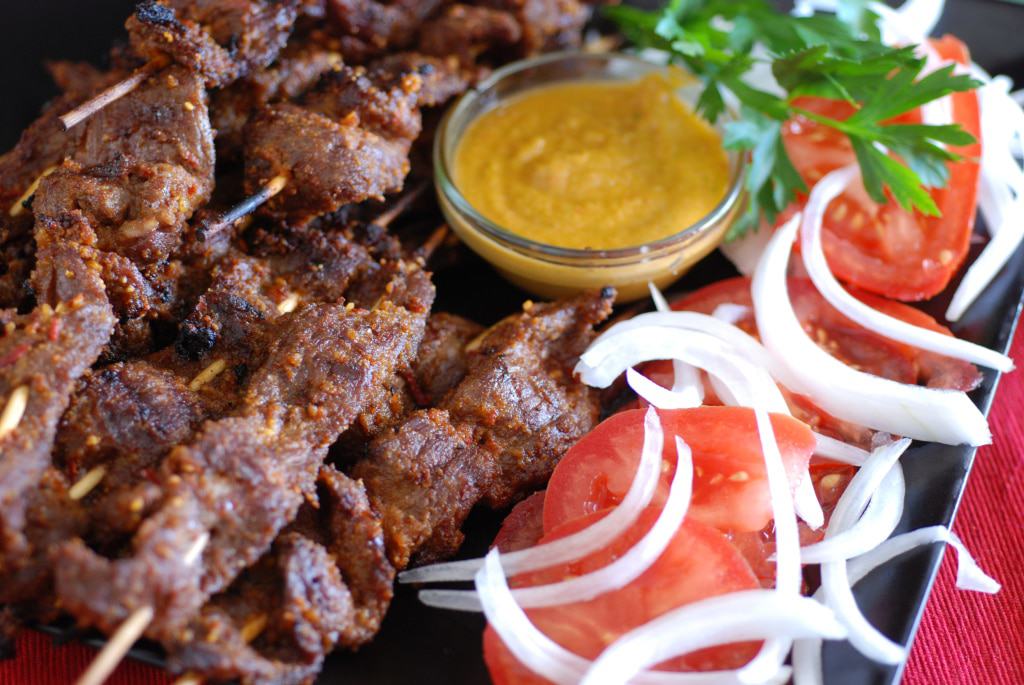 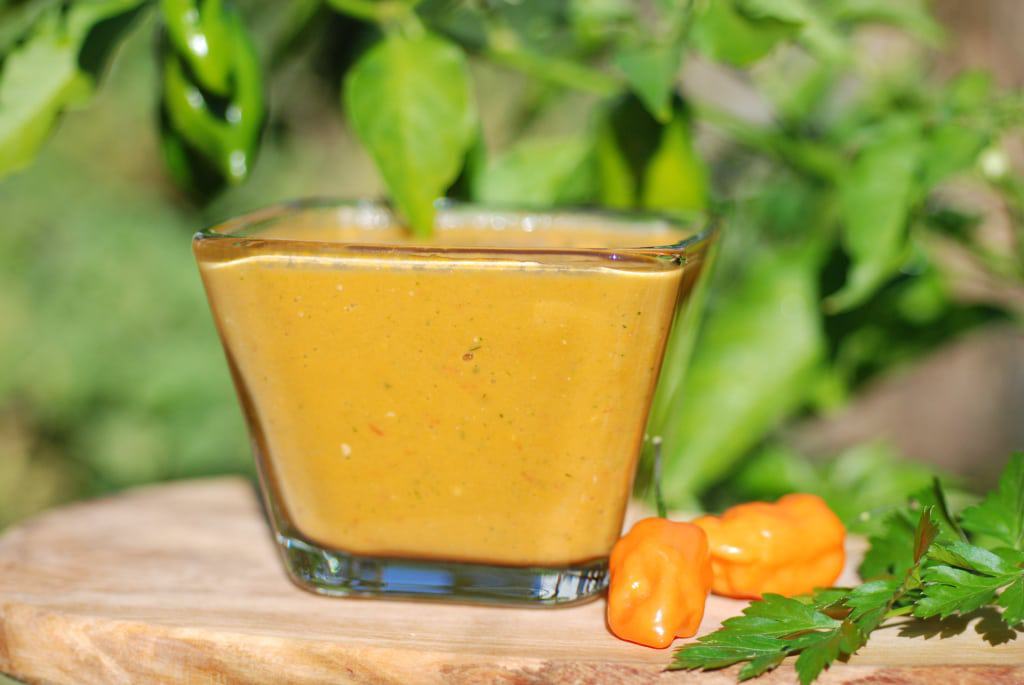 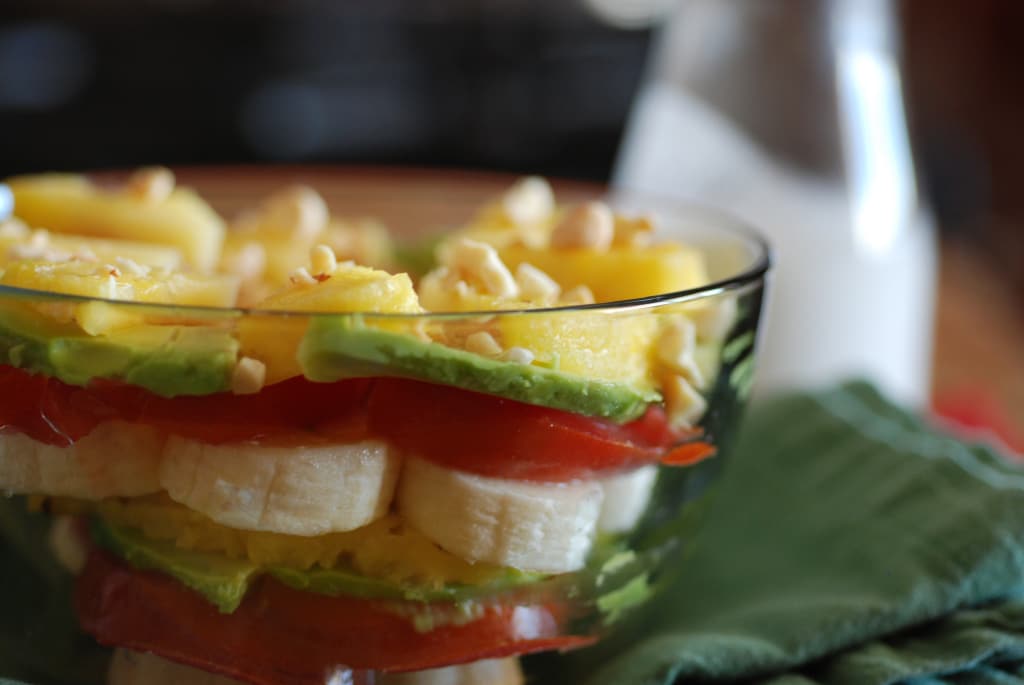 We sat on the floor to eat Cameroonian style. We poured ourselves a non-alcoholic drink, called ginger beer. We turned on the very popular music from Cameroon, called Makossa. The dishes were served communal style, as would be customary there. We began with a hand washing. Food is eaten only with the right hand, as the left is considered unclean, even after washing. Typically in Cameroon, men and guests are served before women and children. We used the colors of the Cameroon flag for decorations; red, yellow and green. The colors represent unity, happiness and hope, respectively. They are also the traditional pan-African colors.

We began with the shrimp and prawn rolls, which were delicious, accompanied with a sauce made of bell peppers, tomato and onions. I decided to change the plating of these little treats to make it easier to eat by hand. Instead of rolling the prawn in the plantain, I placed a prawn on a fried plantain chip, and topped it with the sauce. This made them much easier to manage.

Next was the subtle, coconut soup, a very nice starter, but we felt it was a little bland and so we spiced it up with red pepper flakes. That was the perfect addition and it was still authentic to Cameroon cuisine.

Now sometimes, I think things happen for a reason. The fufu I tried to make that did not turn out, led me instead to create a popular street food called Suya. Wow talk about love…… This spicy, beef kabob (which I am sure could be made with chicken, goat or lamb), was served simply with slices of onion and tomato and a hot pepper sauce, made from habaneros and tomatoes. It was spicy and had a hint of peanut in the rub. The result was awesome! I also learned that tomatoes do a surprisingly good job of cutting down the heat of a hot chili pepper. I had not given that much thought before, but it’s true and something I will keep in mind.

For dessert, we had a layered banana, pineapple salad that also included avocado, tomato and peanuts. It was very different; I would not normally pair tomatoes with tropical fruit but it worked. The thick coconut milk poured over the top added a lovely sweetness. This was a perfect end to our Cameroonian meal.

As we say goodbye to Cameroon, I leave you with a few proverbs:
By trying repeatedly, the monkey learns how to jump from the tree.
If you ask questions, you cannot avoid answers.
What you don’t know, you will not recognize.

Until next week, warmest regards,
Darlene