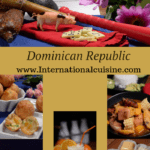 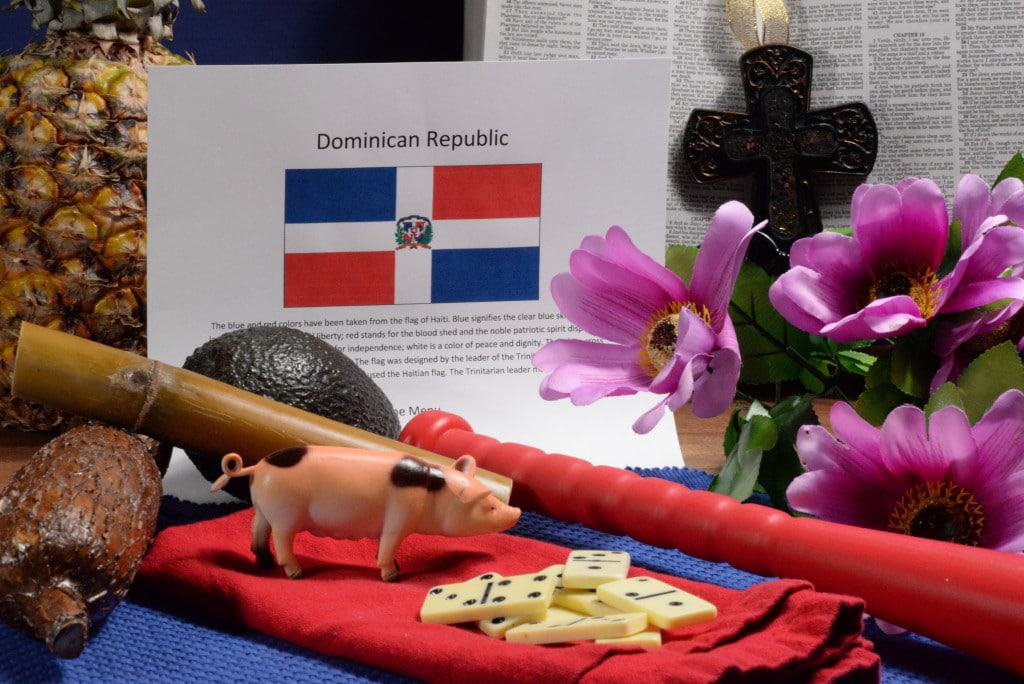 The “DR”, as it is lovingly referred to by its people, is located on the island of Hispaniola. It shares the island with the country of Haiti and is the second largest island in the Caribbean. The capital city of Santo Domingo, is the oldest European City in the Americas. It was the seat of Spanish power in the new world, discovered by Christopher Columbus, in 1492. Santo Domingo was home to the first hospital, castle, and cathedral in the New World. The location was perfect as the gateway to the Caribbean, thanks to the trade winds.

The original inhabitants were the Taino, a peaceful subgroup of the Arawaks, who called the island Quisqueya, meaning “mother of all lands.” When Columbus first arrived, the island was home to around 500,000 Taino, who were living in permanent villages and subsisting on agriculture. Even more important was their gold work; nuggets that were made into small plates or inlayed in wooden objects. Columbus wanted the gold to repay his debt to the King and Queen of Spain. Nearly all the Taino people died in just three short decades after Columbus’ arrival, mainly from harsh labor practices and diseases that the Spanish carried with them. The Spanish then brought in African slaves to work the mines and plantations.

The Spanish left the island for more profitable horizons but the Spanish heritage remained. For nearly 200 years the island was left in a state of depression. In 1697 Spain gave up the western third of the island to the French. This is the area of the island that is Haiti today. After invasions and conflicts between the two, Juan Pablo Duarte, the leader of the Dominican independence movement, entered Santo Domingo on Feb 27, 1844. He declared the eastern two-thirds of the island an independent nation. He then named it the Dominican Republic.

The country went through many struggles and at one point was invaded and occupied by the United States. After that, it was governed for many years by a dictator named Rafael Trujillo, until his assassination in 1961. Today the country is run as a democracy with frequent elections. There were some periods of turmoil after the assassination of Trujillo when many Dominicans fled the country. New York is home today to more Dominicans than the island itself. The second largest population of emigrants now live in the city of Santiago.

The ethnicity today is primarily Creole; a mix of African and European descents. In addition to the Creole, there is a small number of descendants from Africa and from Europe, however Haitians form the largest minority group. The official language in the DR is Spanish and the main religion is Roman Catholic.

Dominicans are known to be laid back; people that enjoy a simple life. Family is extremely important and Sundays are a priceless time spent together, often on the beautiful beaches that surround the island. Today, tourism is the number one industry in the country, followed by agriculture. They harvest many crops including: sugarcane, coffee, cotton, cocoa, tobacco, rice, beans, potatoes, corn and bananas. The island is blessed with rich soils and a diverse topography. The tropical climate varies little in temperature, but rainfall varies seasonally.

The national sport is baseball and more than 500 Dominicans have made it into the major leagues of the United States. Sammy Sosa is just one of the famous players. As the World Series in the United States winds down, it starts up in the DR. Another favorite pastime is playing dominoes, a game that originated in China but was brought to the islands by way of the Europeans. Friends gather to play in parks and alleyways for conversation and camaraderie, over an ice-cold Dominican beer. Seriously, they have the coldest beer. The beer, called Presidente, evidently has some sort of antifreeze that does not allow it to freeze in a freezer, but gets it ice-cold. The Dominicans like to say it’s like a frosty wedding dress and is a welcome refreshment in the warm tropical climate. Speaking of refreshments, the DR is also famous for rum. They like it straight as well as in many mixed, tropical drinks. They also have an unusual national drink called Mamajuana. You will either love it or hate it. It is a brew of twigs, bark and herbs, with rum, red wine and honey and said to be an aphrodisiac.

The cuisine of the Dominican Republic is made up of indigenous dishes, Taino flavors, plus Spanish and African influences. Of course being an island nation, seafood is abundant and they are also big consumers of pork. It is not uncommon to see whole pigs on spits over an open flame. There is one area called Via Vega, where they are known to make the best chicharron. This is pork rind, but uses part of the flesh as well as the skin. It is scored and marinated in bitter orange, garlic, lemons and a bit of oregano and then deep fried in manteca (lard), to perfection. Another interesting area of cuisine is breakfast. You will find stands where they sell fried salami, tostones (fried banana) and spaghetti. This is the trio that is typically served with eggs and loved by all Dominicans for breakfast. On the beaches, you can find the popular fried, whole fish, served with tostones, avocado and a green salad. And one thing you will always find there, is the Johnny cake or yaniqueque, as it is called in Spanish. This fried, dough disc is another DR treasure. 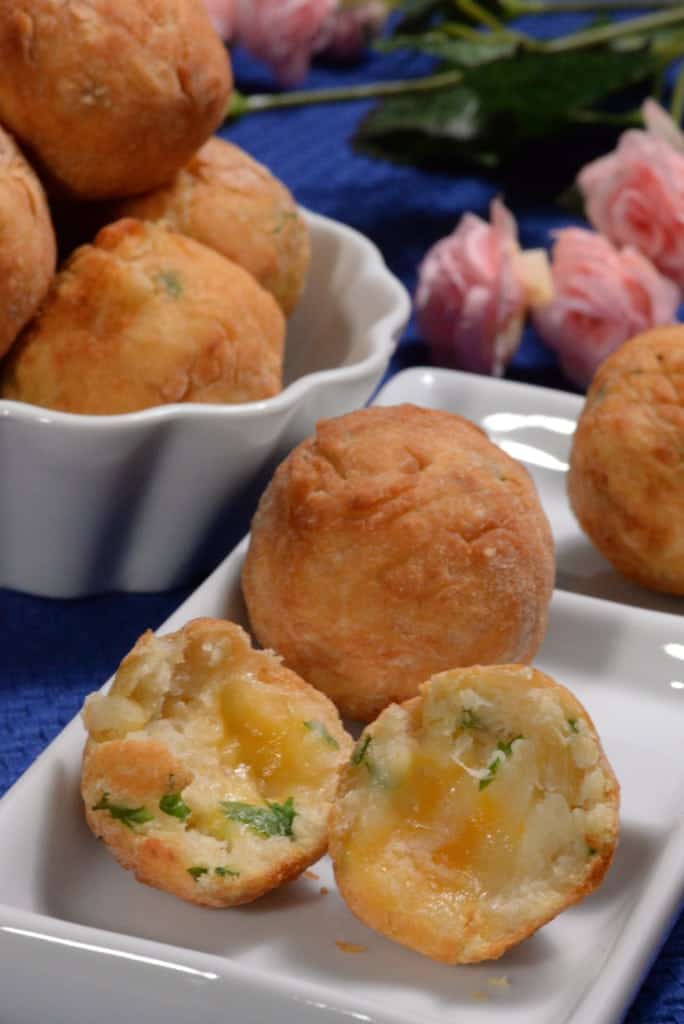 Main
Sancocho (A stew with seven meats and vegetables) 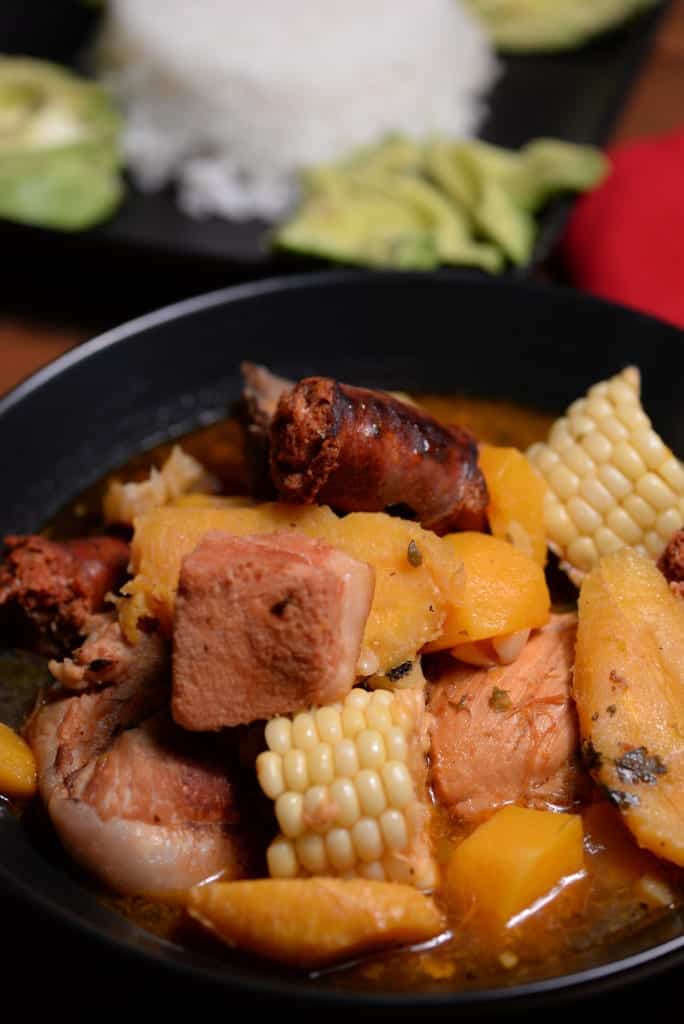 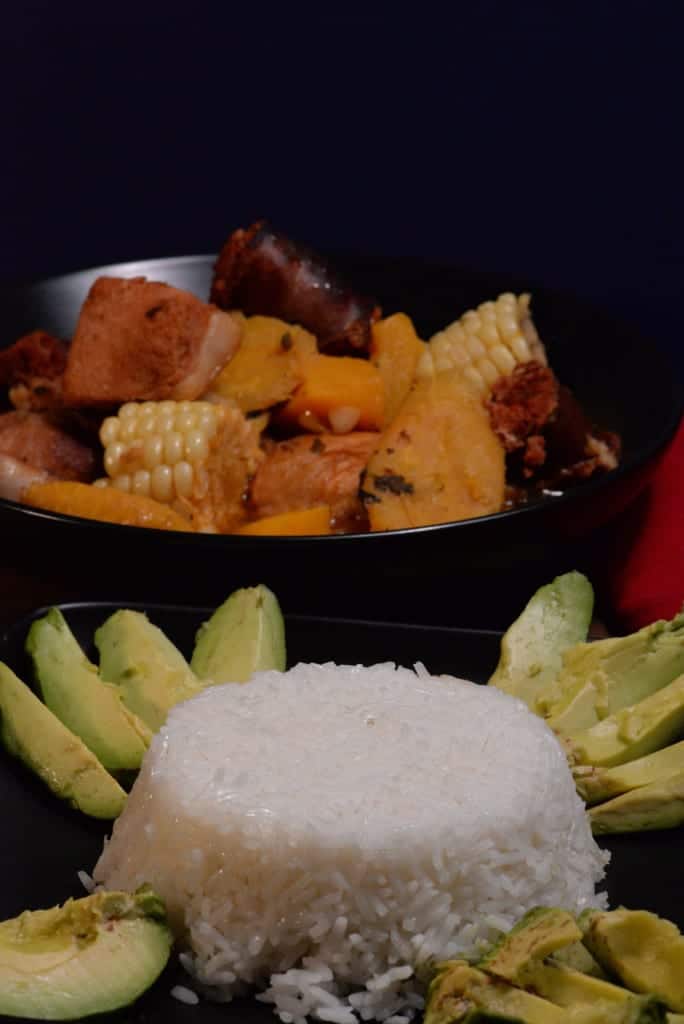 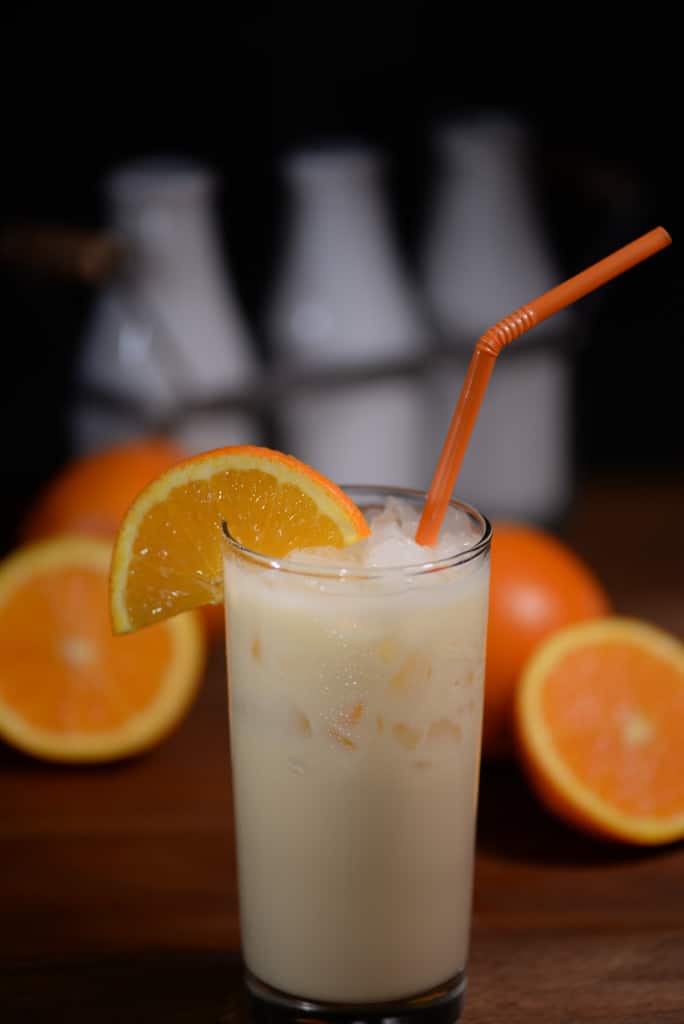 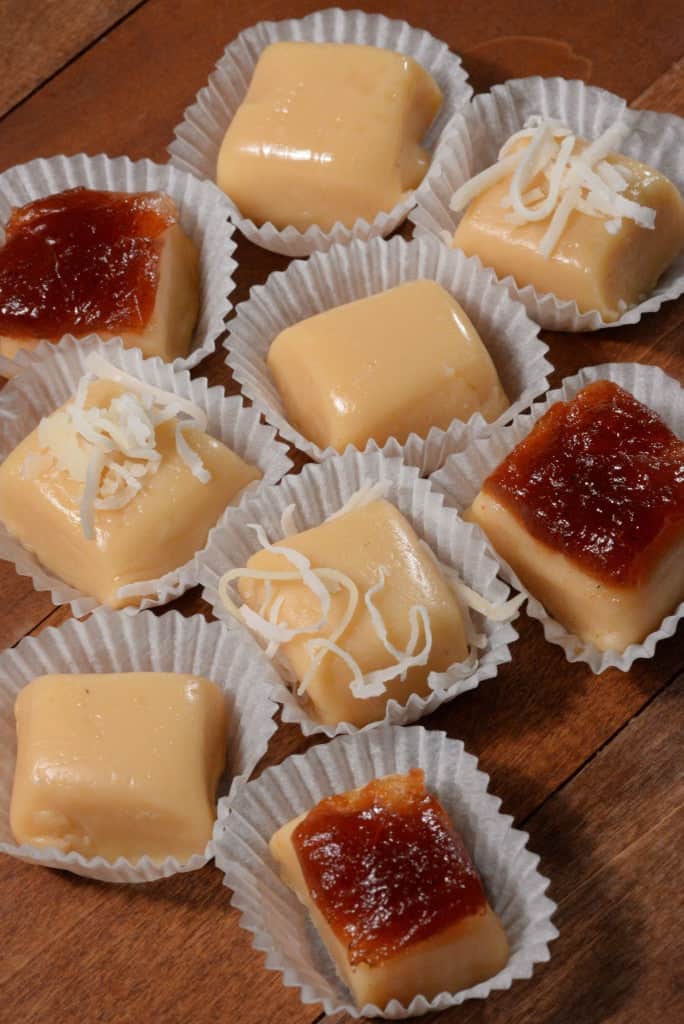 We decorated our table in the colors of the Dominican Republic flag; red white and blue. They are the only country in the world with a bible on the flag. It is opened to the Gospel of John, Chapter 8, verse 32, which reads, “and the truth will set you free.” They also have a small cross on the flag. I choose one to decorate that had an amber hue to it, as the national stone of the Dominican Republic is amber. Amber is a fossilized resin and the DR is home to some of the finest colors. As an aside, George Poinar, an entomologist, extracted DNA from a 30 million year old tropical, stingless bee that was preserved in DR amber. His research was the inspiration for the book, “Jurassic Park”, by Michael Crichton and Spielberg’s movie, of the same name. Portions of the movie were filmed at the Chavon River in the Dominican Repulic and the amber sample can be viewed at the Amber Museum, in Puerto Plata.

We put on some Romeo Santos. He is a hot new musical sensation taking the world by storm with his romantic, bochata music from his homeland, the DR. Music is an integral part of Dominican life and it is said that children learn to dance before they can walk. Dominicans also get credit for developing merengue in the mid-19th century. Its beat is unique, at 2/2, instead of 2/4 rhythm.

We began the meal with a delicious appetizer made from cassava, or yucca root. It was light and very tasty, filled with just the right amount of gooey cheese. We enjoyed it with a very cold Presidente beer.

Next was the main course, Sancocho. If you ask any Dominican what they miss most about their country, most will say Sancocho. It is a stew, traditionally made with seven types of meat and several vegetables. The meat is cooked separately, after marinating in bitter orange. It is cooked with a sofrito base (a traditional puree’ of onion, peppers, tomatoes and cilantro) and then everything else is added to the pot. The pumpkin or squash is what gives it that beautiful yellowish hue. Sancocho is made for every special occasion and any occasion deserving of a party, which often happens in the DR. It is a collaborative effort; everyone will contribute something to the dish, whether it be plantains or meat or sausage or squash or taro or whatever is on hand. It is always served with rice and avocado and is quite filling. The best part is the crusty, almost burnt part, at the bottom of the rice dish. It is scrumptious. This festive dish is usually accompanied by a rum drink.

For dessert, we enjoyed another popular drink of theirs called, Morir Sonando, which translates to “Die Dreaming.” It is a non-alcoholic beverage made of orange juice, milk, sugar and ice. It tastes like one of those creamsicle popsicles I used to love to get from the ice cream truck, back in the day.
We enjoyed our drink with small, bite size pieces of dulce de leche candy, topped with quince paste (made from quince; a misshapen relative of the apple and pear) and shredded coconut. This was a wonderful, sweet ending to our fabulous DR meal.
Now we are off to a dance lesson; the Merengue of course. (That 2/2 beat that sweeps you off your feet.)
Until next week,
Warmest regards,
Darlene