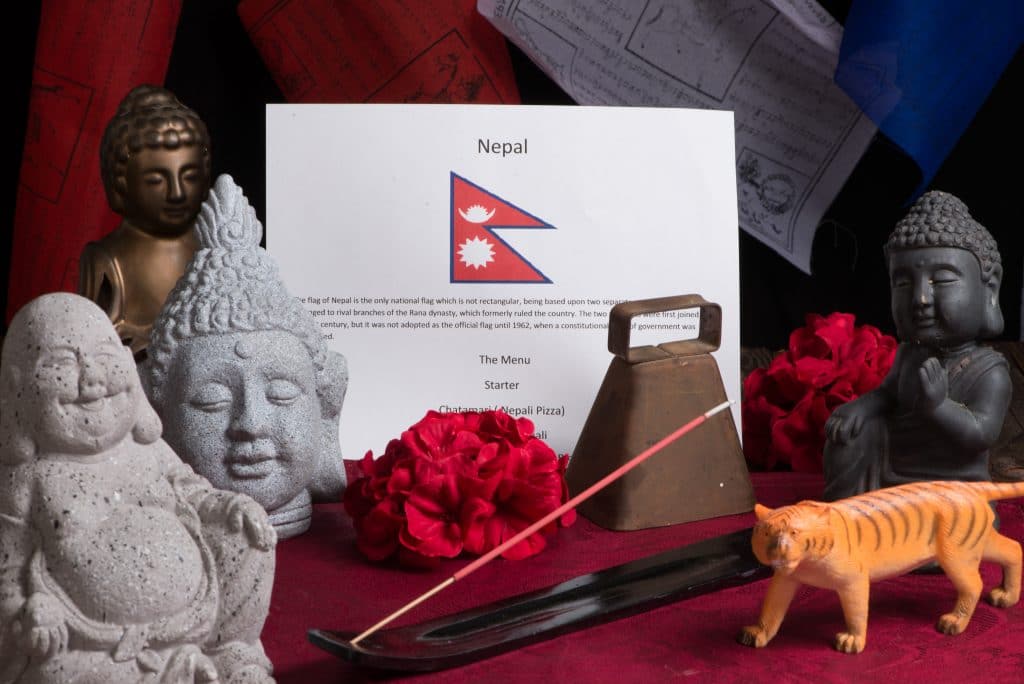 How this mysterious country got its name is not completely known.  The most common theory comes from the Nepali scholar, Rishikesh Shah, who says that the ancient chronicles report it was named after a sage, Ne.  He was believed to come to the area for meditation and later became the protector or “Pala” of the land.

Nepal is nestled between two massive countries; China to the north and India to the south.  It has two other close neighbors, Bhutan and Bangladesh, but their borders do not touch.  This landlocked country does not celebrate an Independence Day, as it was never technically colonized by another nation.  In 1923, Britain recognized the absolute independence of Nepal.  Between 1846 and 1951 the country was ruled by the Rana family.  In 1951, the king took over all the power and proclaimed Nepal his constitutional monarchy.  The monarchy was abolished in 2008.  The earliest recorded history dates back some 2800 years, when the Kirantis (a Mongolian tribe) arrived in the Himalayan territory.  However, it is the Newars who are considered to be the most indigenous people.  They come from what is now known as the Kathmandu Valley, which holds many legends of Nepal. One of which is the legend of Yeti or the abominable snowman.  Yeti is described as an ape-like creature bigger than a human that lives in the Himalayas.  There have been reported sightings but never a capture, so the folklore remains.  Kumari’s  are real, female child goddess and a big part of the Newar culture.  These girls have to meet very strict criteria and are chosen between the ages of 2 to 4.  It is a great honor to be chosen and it is believed that just laying eyes on a Kumari will bring good luck.  Since the migration of the Newars, all sorts of tribes made their way to the region.  Many different dynasties ruled the land over time.  Today, Nepal is a multiethnic, multiracial, multicultural, country. It is also multi religious, with the majority being Hindus followed by Buddhists.  In fact, Buddha’s birthplace is Lumbina, Nepal, dating back to circa 563 B.C.  Nepal is also a multilingual country.  The national language is Nepali, however over 120 languages are spoken.

Nepal is one of the least developed nations on earth.  Many countries have provided economic assistance to this isolated nation.  It is poor, with nearly half the population surviving on just one dollar a day.  Nearly 75 percent of the land is mountainous.  Nepal is home to eight of the ten largest mountains in the world.  This includes the majestic towering peak of Mount Everest, the tallest in the entire world, at 8,850 meters.  The local Sherpas (an ethnic group in eastern Nepal) call it “Chomolungma” which translates to “Goddess Mother of the World.” The word in Nepali is “Sagarmatha” which means “Forehead of the Sky.”   Many have lost their lives trying to scale the tallest mountain in the world.  Apa Sherpa holds the record for scaling it, and did so, an amazing, 21 times.

Nepal is home to the largest concentration of UNESCO World Heritage sites.  Eight are cultural sites and located mostly in the Kathmandu Valley.  A few of the sites are considered to be the most sacred pilgrimage sites for Buddhists and Hindus alike.  Two are natural sites and National Parks which house a huge array of plant species, bird life and exotic animals.  The Chitwan Park is known for its jungle safari, where you can encounter crocodiles on the lake and take cultural tours on the lifestyle of the Chitwan people.  In the Sagarmatha Park, is where you can encounter rare species of exotic animals like: snow leopards, pandas and lynx, to name a few.

Nepal does not have many natural resources.  Agriculture employs two thirds of the nation but only accounts for one third of the GDP.  They are the number one producer in the world of mustard seed and third in the world for ginger.  Tourism plays an important role in the economy, although political instability has taken its toll on this sector.  The many rivers and plentiful snowfall in the region have massive potential for providing hydro-electric power, which Nepal dearly needs.  In most parts of Nepal, electricity, is only available for half the day.

As we look into the cuisine of this intriguing nation, it is quite regional according to the topography and what is available, based on the soil and climate.  Often culinary choices are determined by culture, ethnicity, and religion.  Yet, some dishes are found everywhere.  The national dish of Nepal is called, dal bhat.  Dal is a lentil soup. This is served over a grain called bhat, which, based on the region, could be rice, roti, a flat bread, or a porridge, made from other types of grain such as buckwheat, barley or millet.

Generally speaking, Napali’s food has Asian, Tibetan, Indian and Thai influences.  For example, Tibetan style dumplings with Nepali spices called Momos, are one of the most loved snacks. These delicious treats can be made with buffalo, goat or chicken and there is a vegetarian variety as well.  Cow, is the national animal of Nepal and considered sacred.  It is not consumed for its meat, only for dairy.  Fish is also available in the lakes and rivers.  Curries, or tarkari are very popular, as are pickled vegetables, called achars.  Vegetables often accompany the dal bhat in the form of a curry.  Sag, which are sautéed greens, like mustard greens, flavored with Nepali spices are also widely consumed.  The most common herbs and spices in Nepali cuisine are: garlic, ginger, coriander, turmeric, cumin, Szechwan pepper, fenugreek seeds, sesame seed, mustard seed and chili powder or fresh chili.  Nepalese food is spicy, in both flavor and heat.  Mustard oil imparts an interesting dimension to their food.  Only about half the population consumes alcohol.  It is typically spirits, made from millet or rice.  Tea is the most common beverage followed by buttermilk.

So let’s enjoy a Nepali meal: 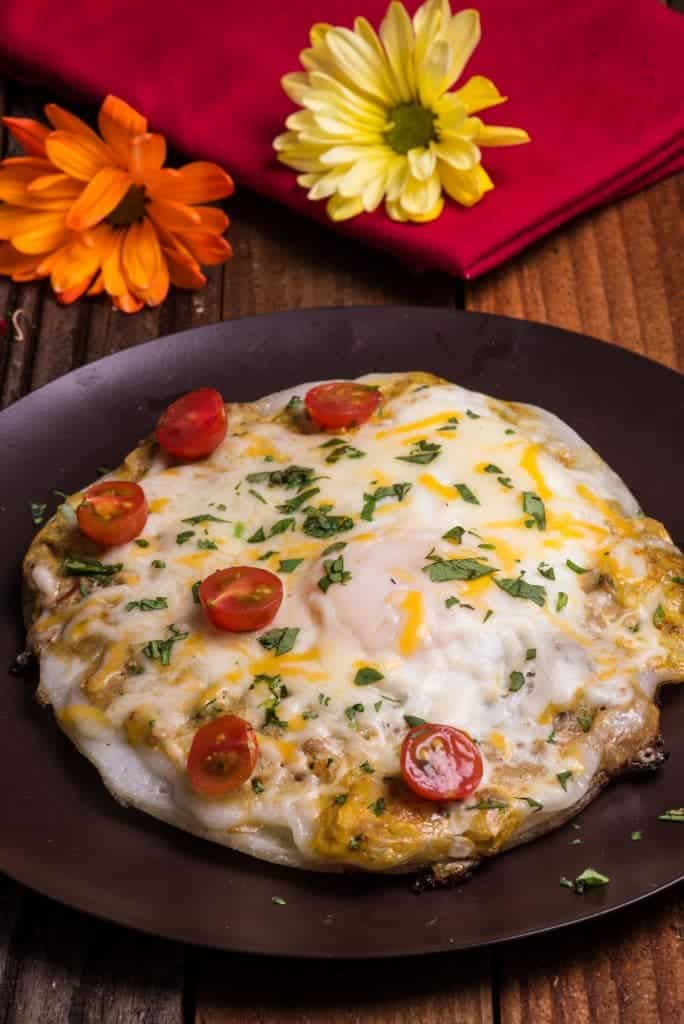 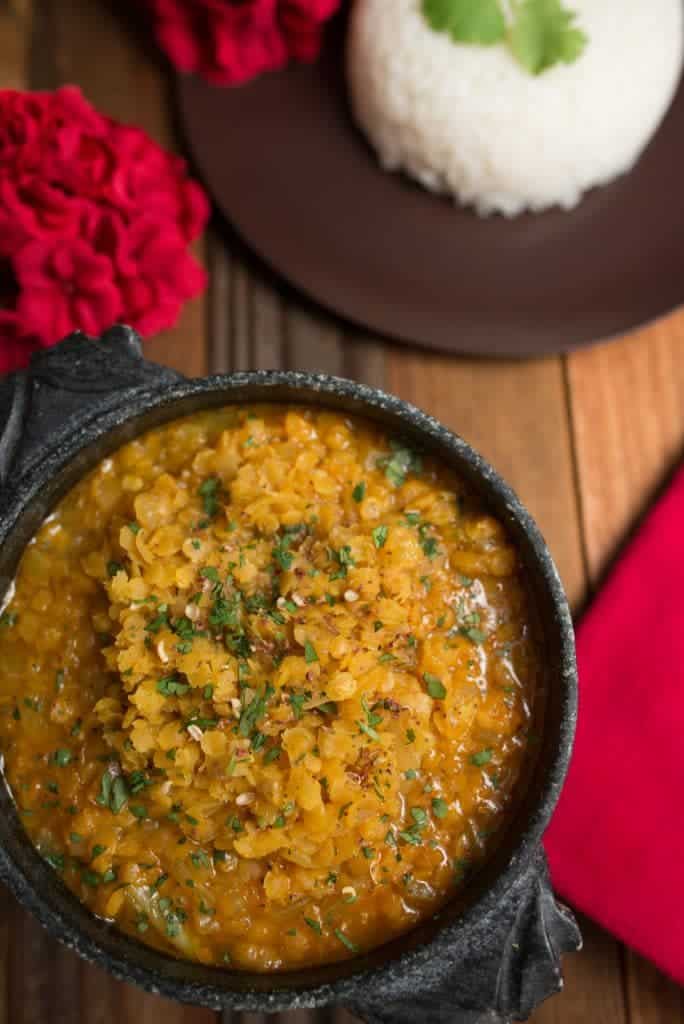 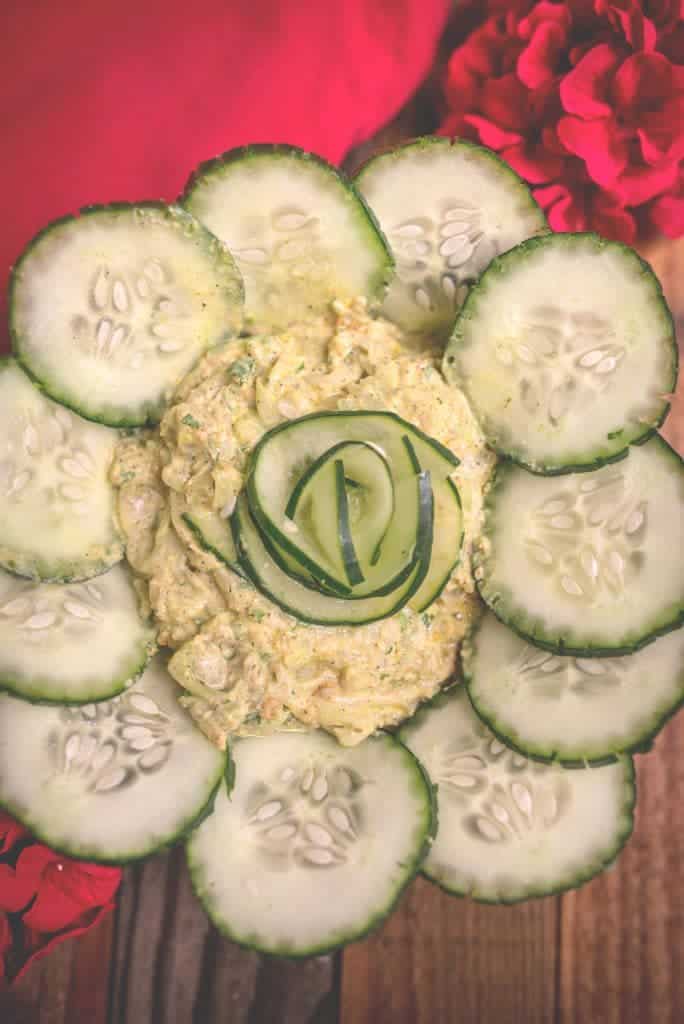 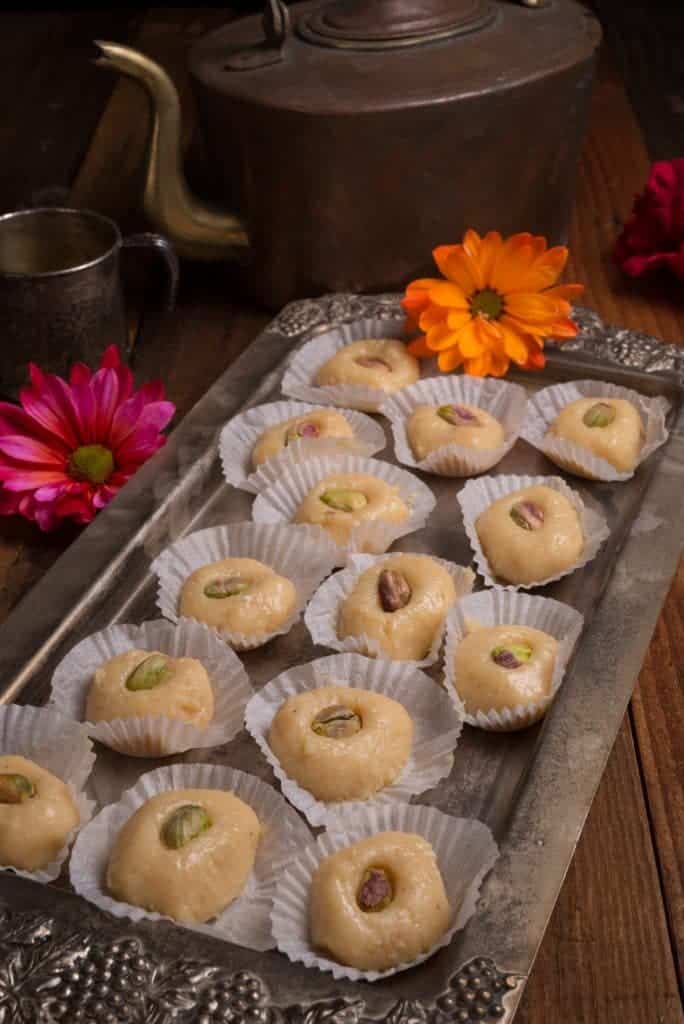 We set the scene by stringing prayer flags from the ceiling, in the form of a mountain peak representing Mt. Everest.  Our place settings were crimson, Nepal’s color of the world's only non-quadrilateral national flag and we decorated with Buddha and Hindu figurines.  We burned incense and scattered petals of various flowers to represent the rhodendron, the national flower of Nepal.

We began with a street food called chatamari, often referred to as Nepali pizza.  This was a real hit.  I made two versions: one with buffalo meat and one vegetarian.  The crust of the pizza is made with rice flour and then topped with spices and meat or vegetables.  It is then topped with an egg, cooked all at the same time, for about eight minutes.  It was unlike any pizza we had ever tasted.  The exotic spices and crunchy, rice crust, made it unforgettable.

For the main meal, we served it thali style.  Thali is a very popular way of eating, which consists of a large, round platter with rice stacked in the middle and surrounded by a variety of  dishes.  It is  eaten with only the right hand.  We put our palms together and we said “namaste.”  This is a common greeting in all of Nepal which literally means, “Bowing to you.”  In Hinduism, it has a spiritual importance which reflects a belief that the divine and soul are the same in you and in me.  So, “namaste’s” deeper meaning is, “I bow to the divine in you.”

Our thali had steamed, white rice in the middle and was surrounded by a lentil soup;  the national dish, dal bhat.  One can easily see how satisfying these dishes would be when mountaineering in the Himalayas.  I understand this is the main meal served on the trek to the Everest base camp.  It is so important in fact, that often climbers rate each day’s trek by the number of servings to complete the task. “ Is it a two dal bhat climb or four, for a really hard climb?  It is a perfectly balanced meal used to fuel the climbers in the Himalayas as well as everyday folk in Nepal. Our dal was made with red lentils and all the rich Nepali spices.  We loved it!

Our thali was also served with a chicken tarkari.  This tarkari  or curry, had similar spices in it as the red lentils.  However, the chicken  is first stir fried and then braised in a stock.  This resulted in a super tender and flavorful chicken curry. awesome with the steamed rice.

Next on the thali was an achar; a cucumber pickle salad.  This achar is meant to cool the palate from the heat of the Nepali dishes, although it has a bit of spice as well.  The coolness comes from the cucumber itself, along with splash of lemon and dollup of yogurt.; another wonderful Nepali dish.

Cauliflower and potato aloo followed.  The cauliflower is cooked dry, along with potatoes, allowing the water in the vegetables to be released.  It is flavored with cumin, ginger, fenugreek and chili.  The trick is to get the cauliflower and potatoes cooked through without them becoming mushy (which is why it is cooked without water).  The result was tender morsels packed with tons of flavor and heat.

I think this last dish on the thali was my favorite.  It was a grapefruit and orange salad.  It too had the Nepali flavors that we have come to enjoy but it had a sweetness to it as well.  It was the perfect accompaniment to the other dishes on the thali.  It had yogurt in it, with toasted sesame seeds.  Mustard oil flavored the fenugreek seeds and also the turmeric.  It does indeed impart a wonderful flavor.

For dessert we had peda.  This is basically a milk candy made from sweetened condensed milk (or by making your own sweetened condensed milk) and cooking it until it turns into a candy.  It is then rolled into bite size pieces and garnished with a pistachio nut.  These treats are loved as a dessert with tea but also are considered a gift for the many Hindu gods.  We loved them too!

Nepal suffered a horrific earthquake back in 2015.  They are working on rebuilding their infrastructure (which was not very well developed before the quake.)  The 7.8 magnitude quake killed nearly 9000 people and injured another 22,000.  It demolished more than half a million homes. They continue to receive aid from many nations to help rebuild after their catastrophic losses.  They also are holding a series of elections for the first time in 20 years.  They are being held in three phases, the last one scheduled for September 18th of this year.  Millions are participating.  We hope that whoever is elected, they will continue to rebuild this most extraordinary nation and live in peace.

I  leave you with a few Nepali Proverbs:

“Half a loaf is better than no bread”

“Fruits of labor are always sweet.”

“If you do right things, you don’t have to worry.”