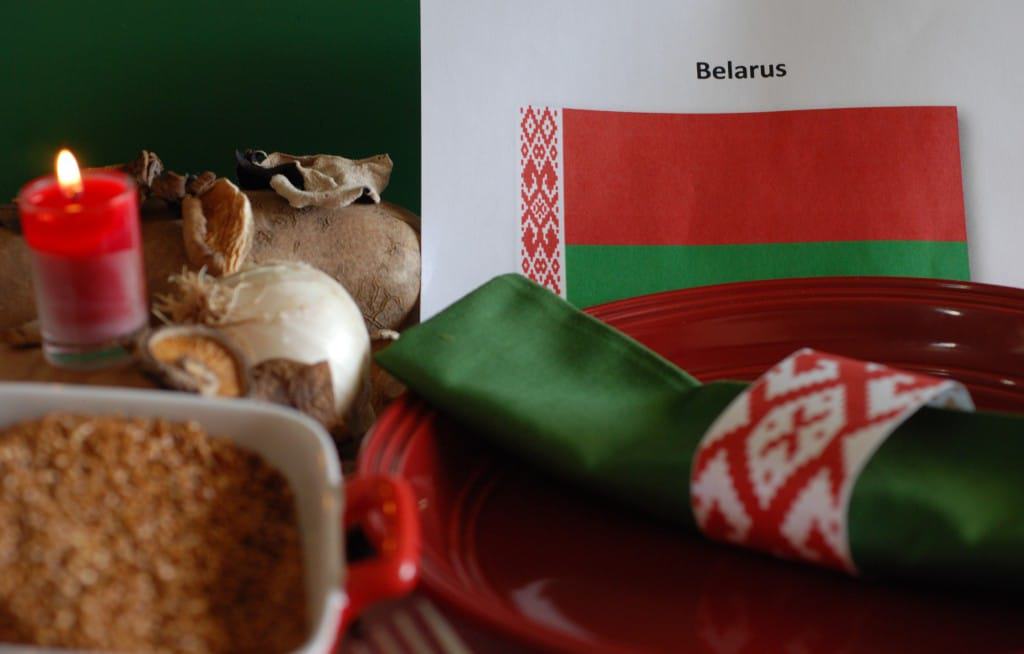 Belarus means “White Russia” and was named back in the Middle Ages, perhaps due to her geography. Belarus is landlocked and bound between Poland, Lithuania, Latvia, Russia and Ukraine. Much of the country is lowland with gently rolling hills. Forests make up one-third of the land. Belarus has cold winters and cool summers with some warm days. She is also known as the blue-eyed country for her thousands of rivers and lakes.

Known to be a culture of tolerance throughout the centuries, Belarus enjoys a diverse society which includes: Belarusians, Russians, Poles, Ukrainians, Jews and Roma (Gypsies). All ethnic groups enjoy equal status. Belarus has had an arduous history and gained independence from the Soviet Union in 1991, yet she still maintains many ties to Russia. Belarus was the battleground for the Polish-Russian wars for some 200 years. Belarus also has been the subject of many invasions over the centuries and her capital, Minsk, has been destroyed and rebuilt numerous times.

Belarus has both natural and architectural sites of major historical significance, with four of them listed on the UNESCO World Heritage list (and 11 more on the tentative list.) They range from castles, cathedrals and fortresses to forests and canals. Speaking of forests, Belarusians love to forage for mushrooms and berries and they use them extensively in their cuisine. Their ancient forest, called Byelavyezhskaya, is a source of national pride and the home of the giant European bison called the wisent, considered to be the national animal of Belarus.

Flax, a bright blue, five pedaled flower, is the national flower of Belarus and featured on her coat of arms. It is probably the most useful national flower I have come across since flax has so many beneficial uses. Aside from being a super food with numerous nutritional and medicinal qualities, it also is made into linseed oil and even used as the fiber to make United States dollar bills.

Agriculture is very important to Belarus. She produces an amazing spectrum of fresh fruits (especially berries) and fresh vegetables, including potatoes, beets and greens. Cereals, meats and dairy products are also processed in abundance and many of these products are exported to neighboring countries, Russia being a major market.

In 1986 Belarus was massively impacted by the nuclear accident at Chernobyl. The accident happened in the Ukraine, however Belarus suffered with almost 70 percent of the fall-out. Nearly 25 percent of the country is considered to be uninhabitable due to radiation contamination. Aside from the land contamination, her people who were in the area at the time suffered the horrible effects of radiation exposure, causing many cancer related deaths.

In Belarus, there are an abundance of preserved national traditions kept alive through dance, dress and folklore. The traditional two piece, Belarusian dress originated from the time of the Kievan Rus and continues to be worn today at special functions.

Kaliady is a time when the country celebrates an entire season with many traditions for those of all faiths and includes a celebration of the winter solstice (December 24 through January 7). As many Belarusians are Orthodox, they celebrate Christmas on the 7th of January. In an Orthodox home on Christmas, a dinner will be served on hay to symbolize Jesus’ birth in Bethlehem. Additionally, twelve dishes are served, one for each of the apostles. There are many other fascinating traditions of fortune telling and magic tricks during this celebratory time.

Belarusian cuisine has been inspired by two main factors; active farming and extensive use of fresh local produce. Neighboring countries and migrant settlers also added influence. The recipes offer a continuum, from the simple, considered peasant food eaten by commoners, to a sophisticated culinary fare reserved for nobility. Their cuisine is rich in greens, beets and potatoes. Mushrooms, in all forms, are extremely popular, as well as fruits and berries. For spice, they typically use caraway, coriander, linseed, mustard, horseradish and dill.

In recent times, their diet has incorporated all kinds of meats including wild game like elk, boar and beaver. More traditional fare, such as pork, beef, chicken, river fish and mutton are also commonly eaten. Dairy products, such as curd cheeses, are made from cow and goat’s milk and milk is a common ingredient in many of their soups. Their bread is usually made from rye rather than wheat. Many of their dishes are braised or stewed and would be considered comfort foods, especially on a cold winter day. 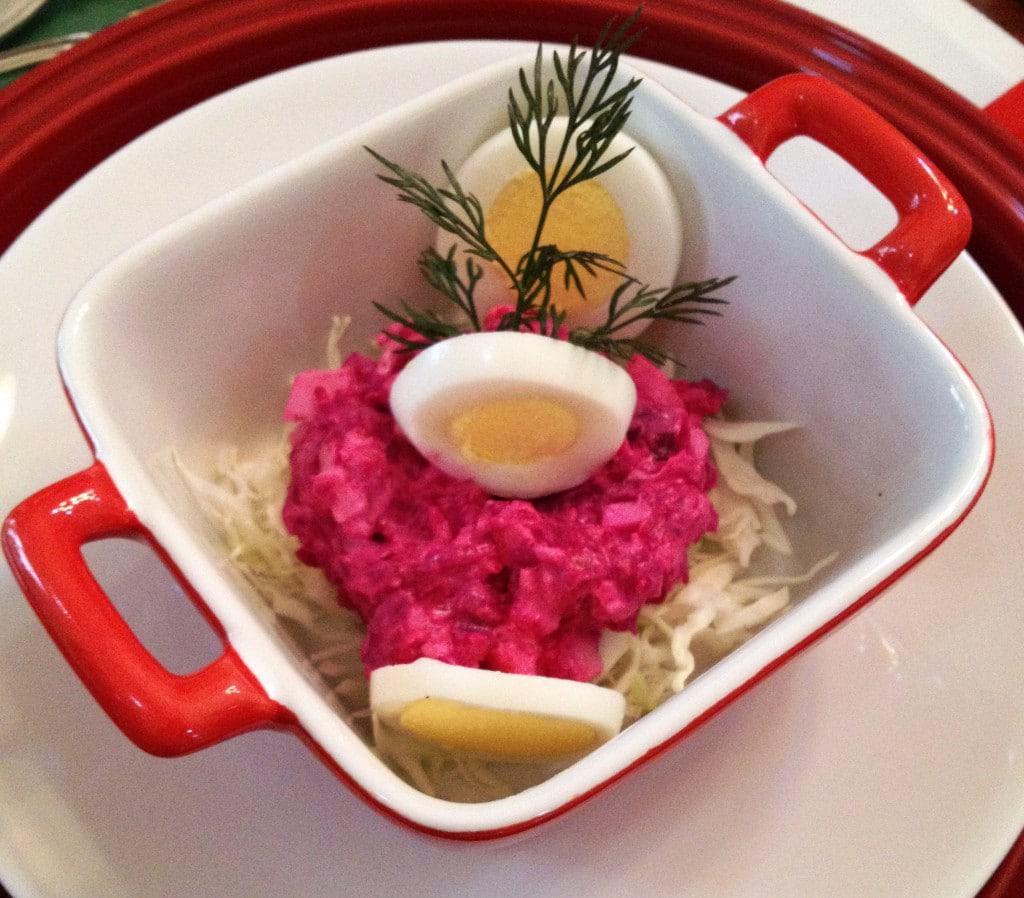 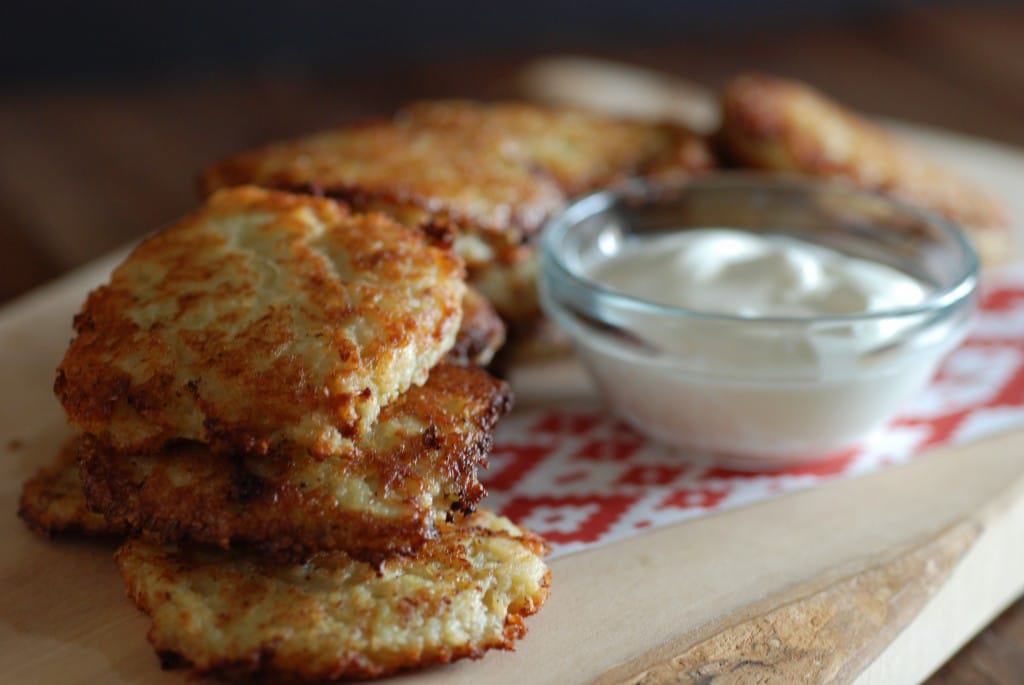 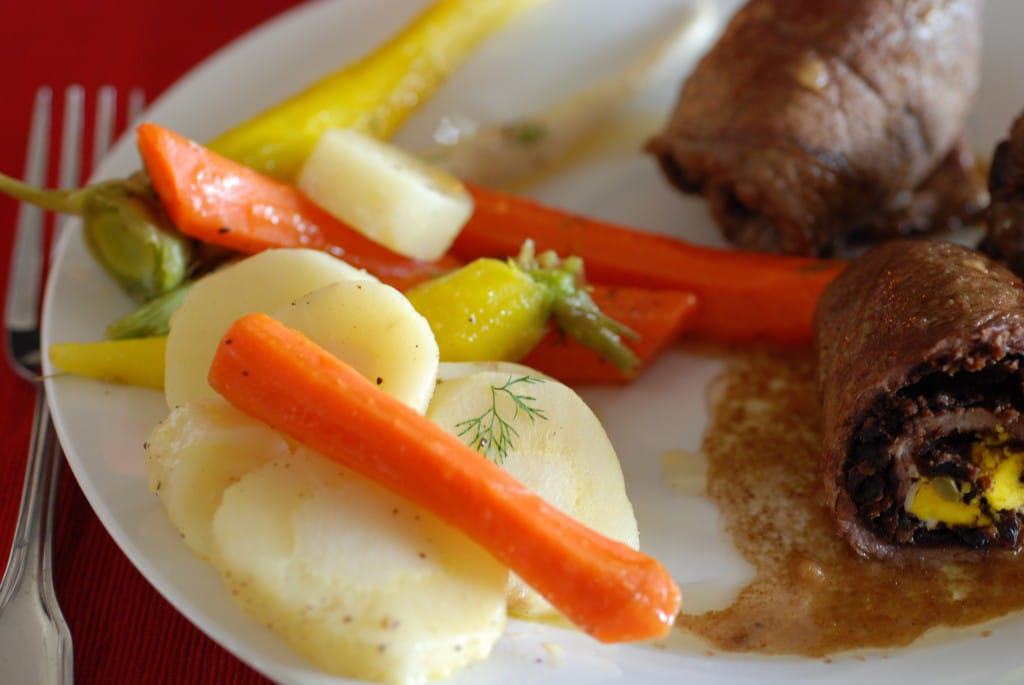 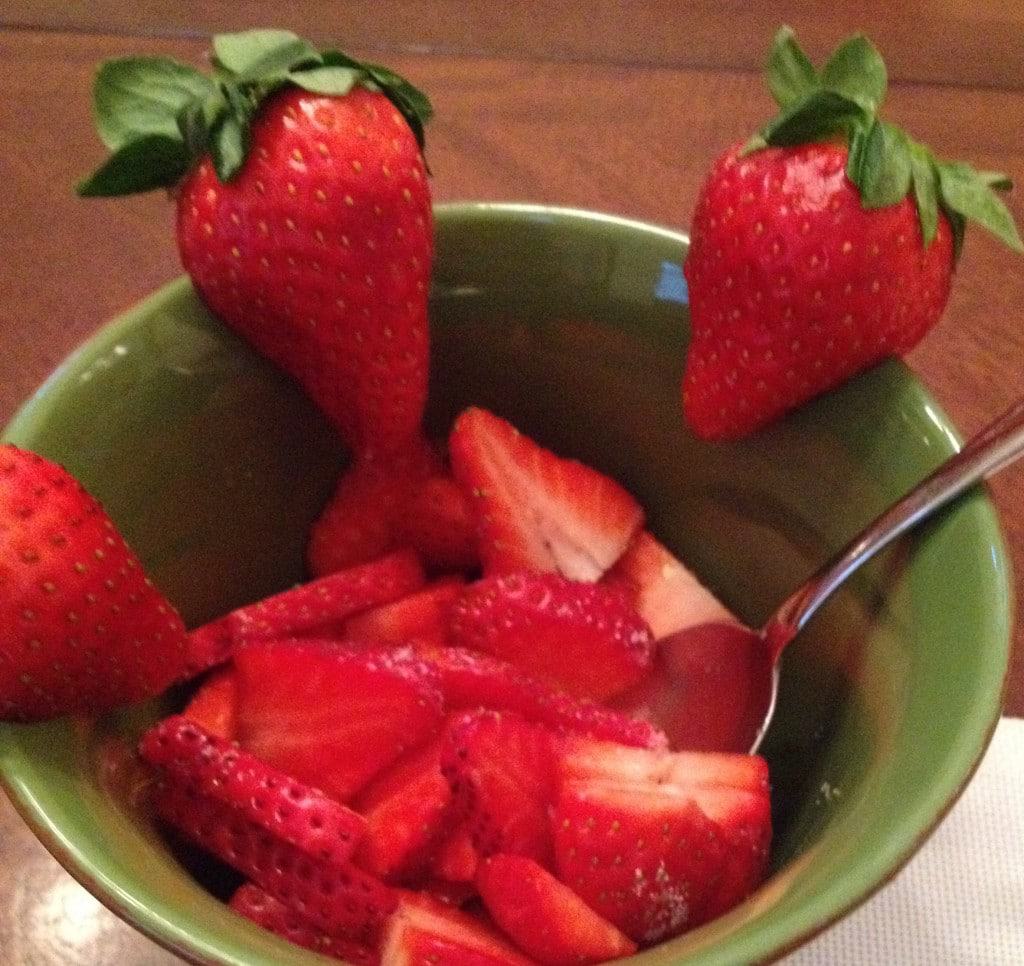 We began our meal with a shot of Vodka, called Harelka, and a toast “Na zdo ro vie” (to your health). We set the table using colors of their flag; red, and green. The flag has a beautiful decorative red and white pattern on it, signifying their rich cultural heritage, her spirituality and the unity of her people. I used it for our napkin rings. Our centerpiece was made up of local staples; potatoes, onions, mushrooms and flax seeds. (By the way, potatoes make great little candle holders!)

Our first course was a country salad featuring, beet root, onions and egg. My husband had always claimed to hate beets but he actually loved this salad. All of the fresh ingredients for the salad came straight from our organic garden. We enjoy the bounty and freshness of our garden, just as the Belarusians take pride in the freshness of their local ingredients.

For the main course we had a dish called Zrazy, which was rolled beef stuffed with porcini mushrooms, onions, egg and cornichon. It was spectacular and went lovely with the potato pancakes called draniki, considered to be the national dish of Belarus.

For dessert, we gathered strawberries from the garden and enjoyed them simply with a light dusting of sugar (which was really not necessary as they were perfectly sweet and delicious.)

As we leave this journey a few things you should know, if you are lucky enough to be invited to a Belarusians home:
Arrive on time and bring a gift, like chocolates or cake. They will likely greet you with bread and salt, as that is a common sign of friendship. Never shake hands until you completely cross the threshold. Females should offer to help in the kitchen, if you are male that would just get you a laugh! Women do not cut bread or pour drinks, the men must take on these roles and men, if you see a woman’s glass empty you should fill it. Always wait for your host to serve you, and the host will make the first toast. It is considered gracious to learn a toast. Once the meal is served, you will eat continental style (fork in the left hand and knife in the right). Try everything offered to you and always remember to leave a little on your plate. This is a wonderful compliment to the host that you are full and more than satisfied. The exception to this rule is bread and alcohol, which you should always finish.

I leave you with another Belarusian toast:
“Budzma”, (may we live!)