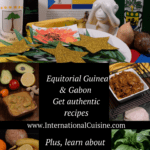 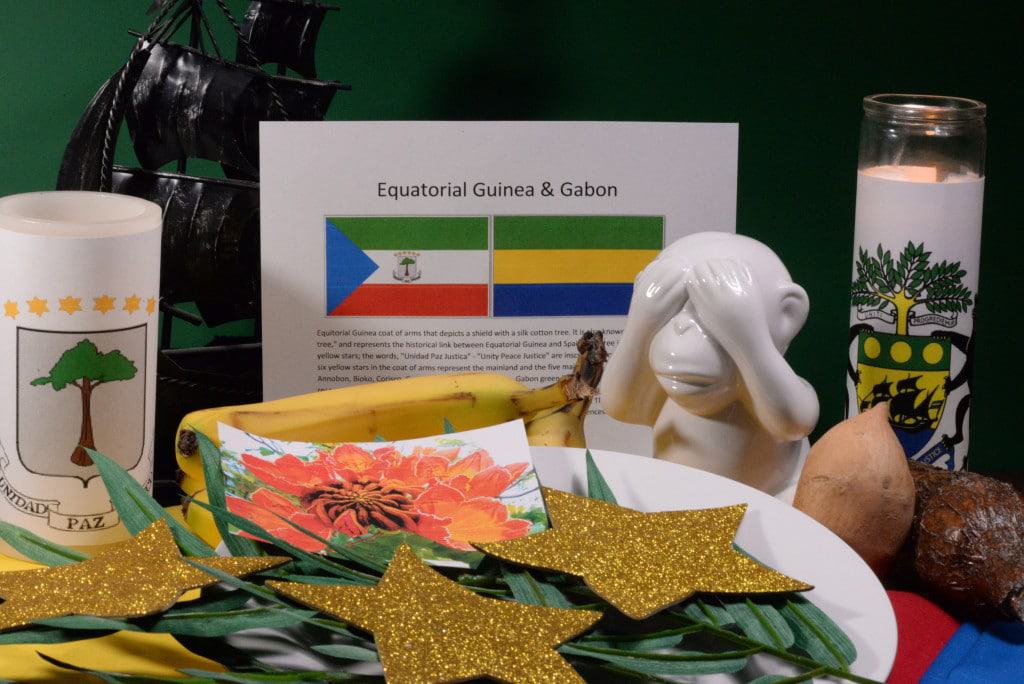 This week, I chose to combine two countries that are neighbors and have many things in common, including their cuisine. Equatorial Guinea is a small country on the west coast of Africa. Her territory includes a mainland area called Rio Muni and five islands including Bioko, where the capital, Malabo, is located. Her neighbors are Cameroon to the north and Gabon to the south and east. It is a mystery why she is named Equatorial Guinea, as the equator does not go through the country at all. Guinea is the geographical name of the gulf that surrounds her coastline and islands. Gabon, on the other hand, is home to the equator. Gabon’s eastern border lies on the Atlantic. Her neighbors are, of course. Equatorial Guinea but also Cameroon to the north and the Congo to the west and east. Gabon was named “Gabao’ which means “hooded cloak,” because that is what Portuguese explorers thought the River Como Estuary resembled. The capital city in Gabon is Libreville, “Freetown,” founded in 1849 by freed slaves, which became the capital city in 1993.

Both countries were first inhabited by the Pygmies, then by the Bantu tribes, followed by the Portuguese, who settled there in the 15th century. The Fang tribes arrived later and today make up the largest ethnic group in both countries. The coast grew into a major center for the slave trade, bringing Dutch, English, French and Spanish traders to the region. In the 1800s, it was the French that occupied Gabon and she was one of four territories that made up French Equatorial Africa. The Spanish occupied Equatorial Guinea and it was part of what was known as Spanish Guinea. The island Bioko, was one of Spain’s most profitable territories in Africa, thanks to the cocoa plantations there. Today the Bubi, descendants of the Bantu, the other main ethnic group in Equatorial Guinea, live on the island. Equatorial Guinea gained independence in 1968 and Rio Muni and Bioki were officially united as Equatorial Guinea. Gabon gained independence from France in 1960.

In Equatorial Guinea, the Ministry of Justice and Religion must approve a religious organization before they are allowed to practice. Despite the fact that the government is wary of the Catholic Church, (for its history of criticizing human rights violations,) 80 percent of the population is Roman Catholic, which is also part of public education system. The indigenous beliefs are animist; the belief that natural objects, natural phenomena, and the universe itself possess souls. There is also a small minority of Muslims.

The government declares itself a multiparty democracy, although it really is run as a dictatorship, for all practical purposes. The current president, Teodoro Obiag Nguema Mbasogo, has been in power since 1979 when he ousted his uncle in a bloody, military coup. The country has emerged as one of Africa’s largest oil producers and is currently listed as the wealthiest per capita country in Africa. Unfortunately, the wealth has remained in the hands of a privileged few, who surround the president and the majority of people live in poverty. The president is said to lead by instilling fear in the people. In October of 2014, the son of President Mbasogo, settled a corruption case in the United States. He agreed to sell 30 million dollars’ worth of property, mansions, artwork, Ferraris, etc., which was half the amount sought in the case. He did not, however, have to relinquish the white, crystal glove that belonged to Michael Jackson, as it was not considered “in country.” Evidently the USA kept 10.3 million and gave the rest to a charity to benefit the people of Equatorial Guinea. This country remains on the human rights watch list for corruption, poverty and repression; it is considered the worst of the worst for human rights.

Gabon has a similar situation, having just two presidents since her independence. The current president is Ali Bongo Ondimba. He is the son of Omar Bongo who was president of Gabon from 1967 until his death in 2009. Gabon also has emerged as an oil producer; fourth largest in all of Africa. Again, the wealth has been limited to the elite. In 2010 the president sparked outrage when he bought a 48,000 square foot townhouse on an acre of land in the heart of Paris. The price tag was 85 million euro (92.7 million US dollars). The average citizen of Gabon lives on less than $12 a day.

So let’s take a look at the cuisine of these two countries. They mostly live on bush meat, (this is usually crocodile, snake, rats, bats and even monkey), fish and subsistence farming. This is the food they have been eating for centuries. It is life-sustaining protein, where nutrition is scarce. Their staples are palm oil, palm nuts, cassava greens and root, ground nuts, yams, plantains and fufu. Tropical fruits like bananas, papayas, coconuts, and avocadoes are also available from the dense tropical forests that both countries contain. In Gabon, they cover over 80 percent of the country and house over 70 percent of the world’s gorilla population. The government has set aside areas in the forests as national parks, to preserve wildlife and protect the land.

Please note that all these dishes and sauces are enjoyed in both countries. 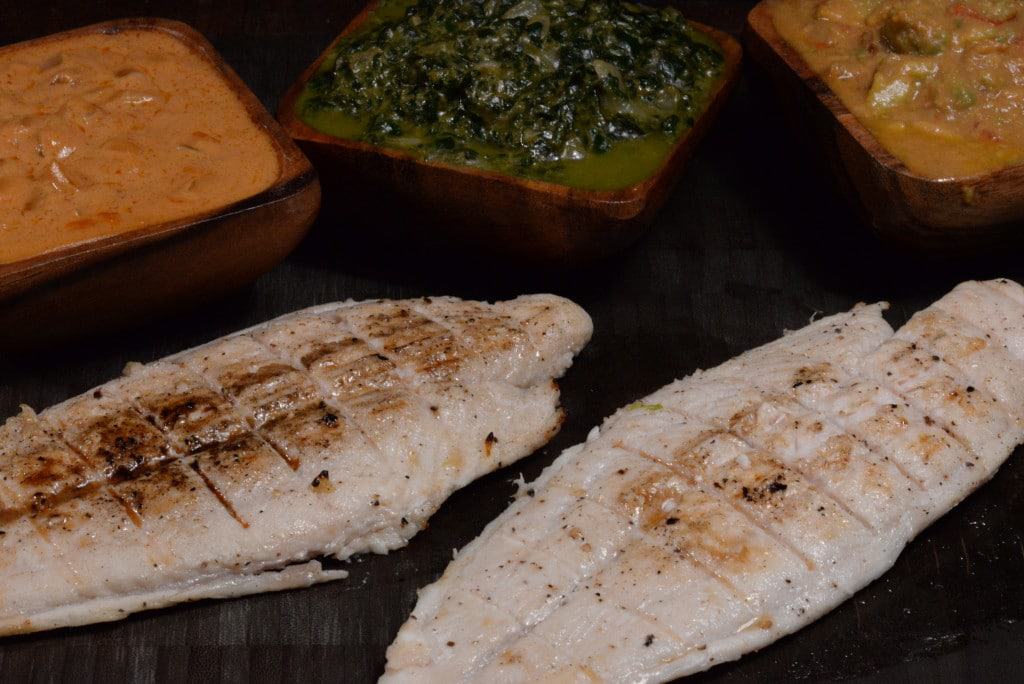 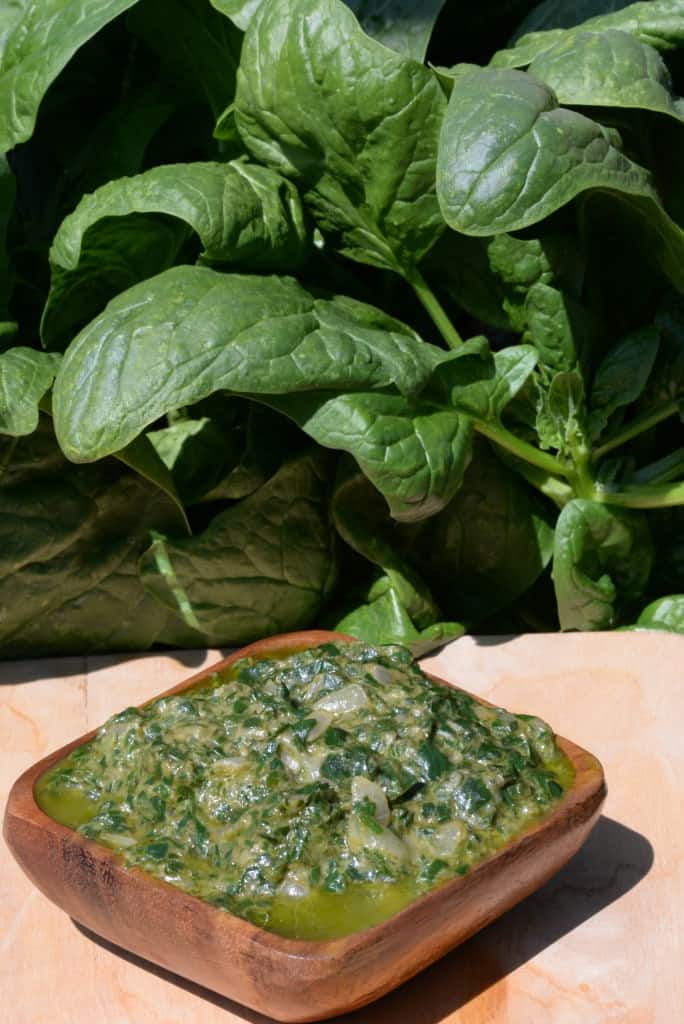 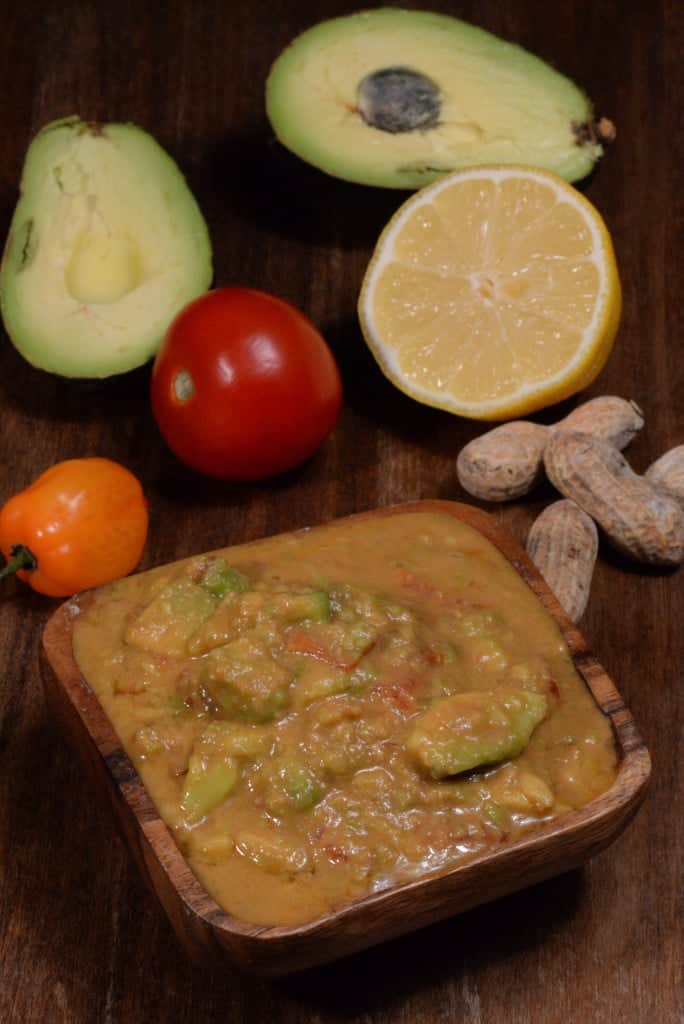 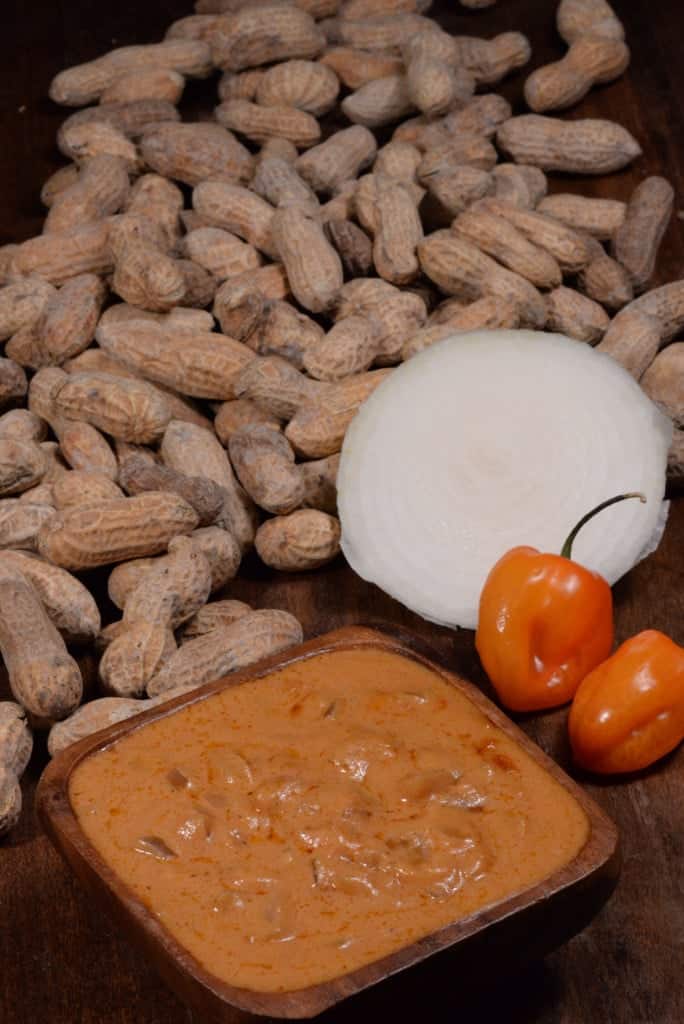 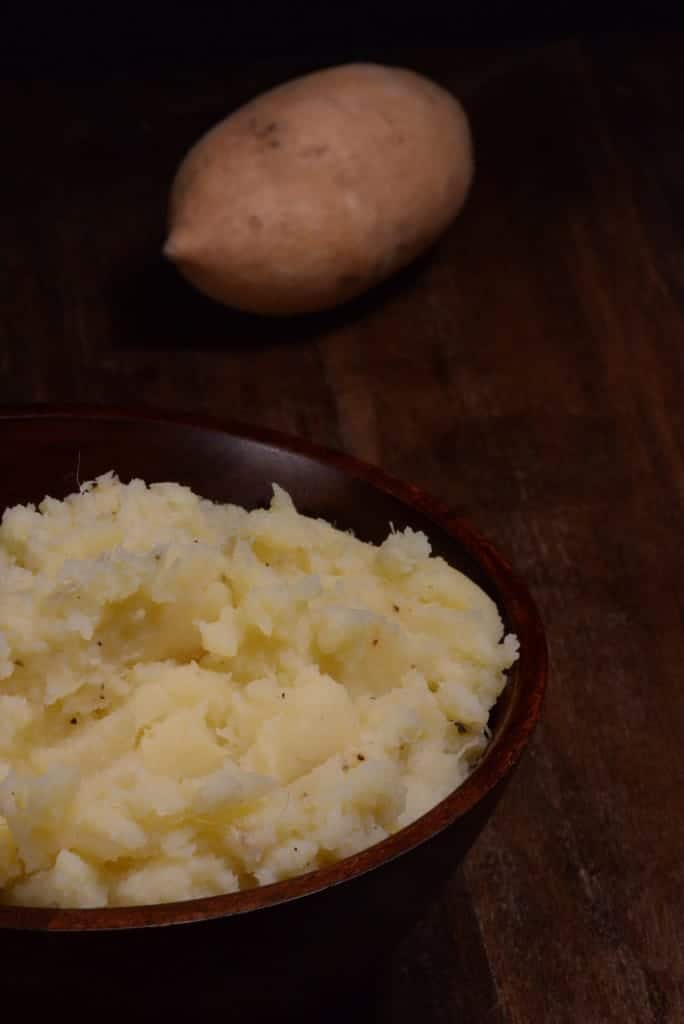 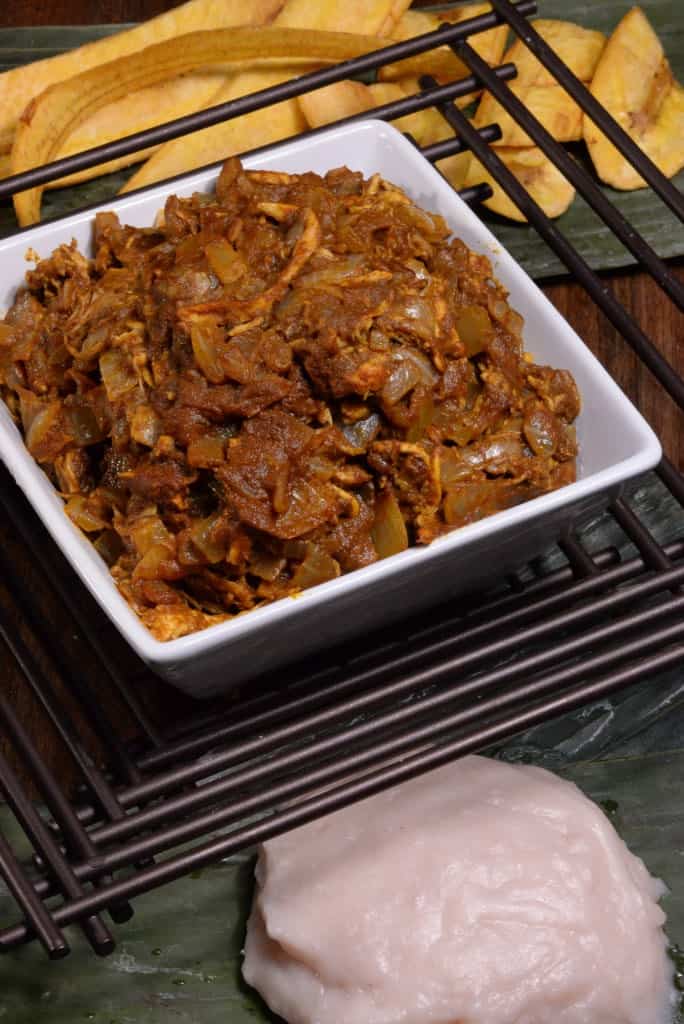 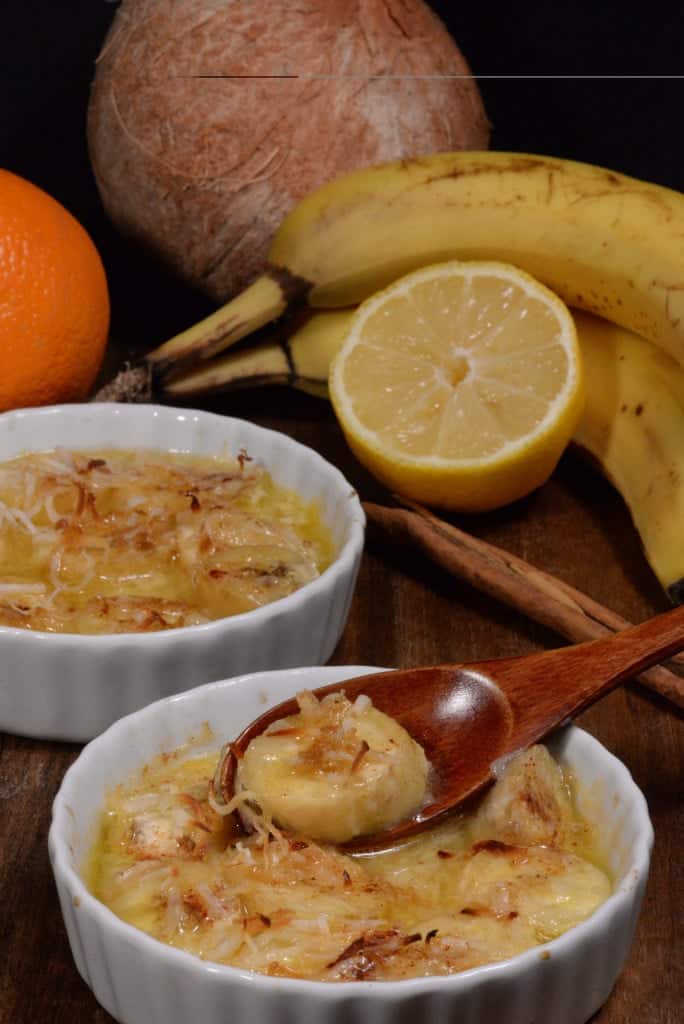 We set up our mats with the colors of both countries’ flags; green, yellow, red, blue and white. We decorated with palm fronds, to represent their lush tropical rainforest and a cute monkey that sees no evil. We added a ship, to acknowledge the woeful days of the slave trade that they put behind them and of course added some of their everyday foods; yam, cassava and bananas.

On the stereo, we played tribal, African music. (This is, after all, where rhythm got its roots.) We began our meal with a prayer that somehow the people there can find a way out of poverty and that the corruption and human rights violations would cease.

As is their tradition, we would eat with our hands, after a cleansing ritual. We then began with the main course, after saying thanks for the food before us. The fish, to be served with three sauces, was exceptional in its own right, just marinated and grilled. It really did not need any sauce at all. However, I loved all three sauces, as did my husband. If we had to choose a favorite, mine was the avocado and his was the peanut sauce. Each one had a unique flavor, with a nice kick from the peppers.

For the Gabonese main course, called nyembwe, the smoked shredded chicken cooked with onions and the palm butter was very different from anything we had experienced before. The palm nut butter, we found bitter, but it blended well with the onions that were caramelized for sweetness. This dish was enjoyed with fried plantains (yum) and some fu-fu. (Remember, from our previous journeys, the round, starchy balls made from cassava?)

For dessert and a lovely ending to our Equatorial Guinea and Gabonese meal, we fell in love with Akwadu. This recipe, found in both countries, consists of bananas, cooked in citrus, butter, coconut and sugar; excellent!

As we say goodbye to these two African countries, we do so remembering that this journey we are on is designed to gain a better appreciation of the people based on their struggles and traditions. I leave you with proverbs from both countries.

From Gabon:
To one who does not know, a small garden is a forest.
Rain does not fall on one roof alone.
He who asks questions, cannot avoid answers.

And from Equatorial Guinea:
A wise man never knows all, only fools know everything.
A good wind is no use to a sailor who doesn’t know his direction.
and
If you dream of moving mountains tomorrow, you must start by lifting small stones today.